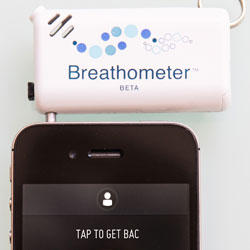 Hey guys, occasionally a cool product comes our way that is more than just a toy (or hopefully is useful anyhow). We'll be getting a unit to test out later this summer, but thought you would be interested in a preview of it now.

Remember, it isn't cool to drink and drive (or drink and swim etc!) and sometimes being on the "edge" is even more dangerous because you don't know your true capabilities.

Breathometer, Inc. today announced it has created, the World’s First Smartphone Breathalyzer, Breathometer™. The size of a typical car key, it plugs into a smartphone headphone jack, and -- together with a mobile app -- transforms it into a breathalyzer measuring blood alcohol concentration (BAC).

Survey Results and Need for Breathometer

The need and opportunity for a smartphone breathalyzer is clear. Breathometer and SodaHead.com, the web’s largest opinion based community, conducted a survey to determine drinking and driving habits and experiences. According to the survey:

“Breathometer wasn’t created just to address the risks associated with drinking and driving,” said Charles Michael Yim, Founder & CEO of Breathometer. “but to help people, their friends and family, all to make smart and safer choices when consuming alcohol. Real time BAC measurement is the first step.”

Breathometer is both a device and mobile app that will transform iPhone and Android smartphones into a breathalyzer. Breathometer provides options beyond informing users of their impaired state and plans to connect to local transportation services to quickly connect with a cab or taxi. Upon launch, Breathometer will be available at Breathometer.com, the Apple App Store and Google Play.

Breathometer will be FDA approved and is patent pending. It is ideal for anyone who enjoys even a casual drink, as just one drink can affect judgment or the ability to drive safely. The company will make Breathometer available in Summer 2013, anticipating that the affordable price combined with a quality equivalent to current consumer breathalyzers will encourage widespread use and help grow the market for such devices.

“Breathometer is as much for a parent as it is for someone who ‘parties.’ Both want an easier way to be smart and safe -- for themselves, as well as the people they care about,” added Yim.

For more information and to sign-up to be informed about the latest news regarding Breathometer, please visit www.breathometer.com.

About Breathometer Breathometer is the creator and pioneer of The World’s First Smartphone Breathalyzer. The company is focused on helping people drink smarter and safer. Founded by Charles Michael Yim in September 2012, the Breathometer team enjoys breathing fresh life into people’s lives by applying the best of today’s technology and design. For more information visit www.breathometer.com.