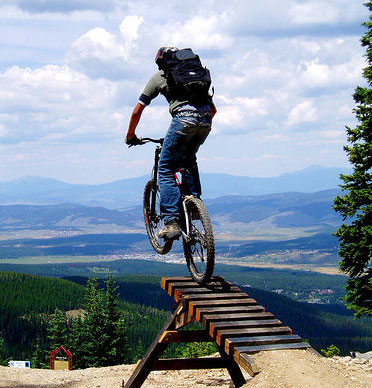 It was a cold, frostbitten morning in central Indiana. It was a dark and extremely early, 4:30am to be exact. It was time to get it on. It was time to pack up and get on the road.

Along with the long 18 hour drive, across the great I-70 with 3 other buddies of mine, this was going to be the mountain biking trip of a lifetime.Long free ride down hills awaited us, along with hard, painful, bloody falls were there for the taking – only states away. (Certainly a good reason to grab some temporary health insurance before heading off!

As I said, we embarked on our Man Trip, at 4:30am in order to arrive in Denver, Colorado promptly at party time on Saturday night. We had the car packed up, the coffee was brewing, and we were ready to roll. We were in my buddy Steve’s FJ Cruiser, so the ride wasn’t too uncomfortable. The other guys I was with were very good friends of mine, we had been riding together for years at this point. We got along well, and as most of you guys know – dudes are chill. We just made fun of each other for a soild, 18 hours or so until we got to Denver.

The ride had its highs and its lows – but all in all, it was just long car ride with some friends. We took a pit stop, somewhere in the middle of Kansas, and took out bikes off the rack and went on about an hour >ride through the plains of Kansas. It was an amazing predecessor to the mountainous hills that awaited
us in the Rockies!

We finally arrived, Saturday night around midnight and got to partying. We were staying at our buddy Jason’s cabin, where he typically goes only in the winter for ski trips. He didn’t realize all that he was
missing in summer, when those ski hills became the countries best downhill mountain biking excursions, where you can reach speeds upwards of 40 mph, flying through gaps in trees that are barely shoulder length wide. It’s invigorating to say the least. As we cracked open a few beers, we unloaded our gear and prepped our bikes for the morning to come.

The following days to come were filled with the wildest mountain biking stories I’ve ever had the pleasure of sharing first hand. There was blood, broken bones, and plenty of dirt rubbed into every crevasse of our bodies. Details on the most exciting part of the Man Trip, to come in the next few days….