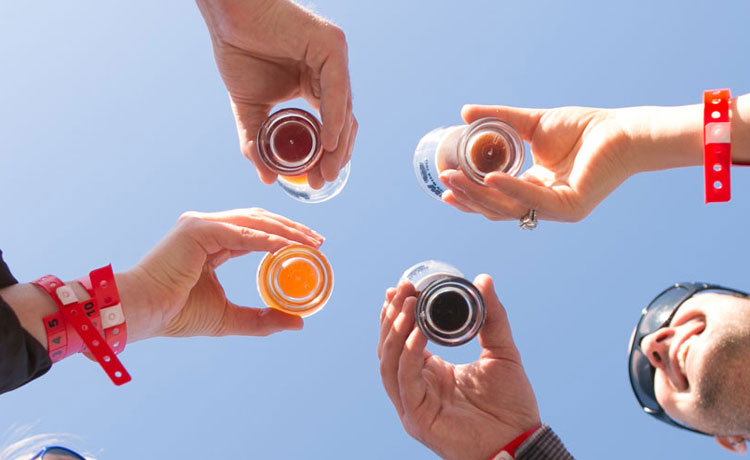 It's that time of year again! Since it's perpetual spring time here in San Diego, what this means is that it's Beer Festival Season and you don't want to miss this festival featuring 100+ craft brews served up from more than 60 breweries, while listening to seven different musical performances that are guaranteed to keep you rocking all afternoon!

We'll be covering the 4th Annual Rhythm and Brews Festival later this month but wanted to give you a preview in the mean time. If you'll be there, let us know - we look forward to meeting up with you there ...

San Diego, CA— March 24, 2015 This spring, the San Diego Brewers Guild will bring together for the fourth consecutive year many of the nation’s most celebrated craft beers and local bands for the annual Rhythm & Brews music and craft beer festival. From 12:00 to 4:00 p.m. craft beer aficionados will gather along ‘Hop Highway’ in Historic Downtown Vista Village in Vista, California to sample barrel aged brews, saisons, sour ales and more from top breweries from around the country while enjoying musical performances from seven popular acts, spanning from blues to folk to funk. Aspiring brewers will also have the opportunity to compete for ‘Best of Show’ in the popular homebrew contest, sponsored by Mother Earth Brewing Co. A portion of the event proceeds will benefit local non-profit Fight ALD, as well as the San Diego Brewers Guild.

Community events, including Rhythm & Brews, are representative of the Guild’s tradition of bringing craft beer to the masses, and offer local brewers needed visibility and opportunity for continued success. According to a recent study, the economic impact of San Diego’s craft brewing enterprise continues to grow substantially— doubling in the last three years to reach an estimated $600 million in 2014. Beer tourism has been an important component of that growth as millions of visitors explore the region to experience our county’s nearly 100 craft breweries. At Rhythm & Brews, a San Diego Brewers Guild premier event – the other being San Diego Beer Week – craft beer devotees can familiarize themselves with the best of San Diego’s brewing culture all in one place. Beer enthusiasts will enjoy an afternoon of unlimited tastings of over 100 craft brews from more than 60 local and visiting breweries, including 33rd Annual Great American Beer Festival award-winners AleSmith Brewing Co., Saint Archer Brewing Co., Stone Brewing Co., Pizza Port Brewing Co., Green Flash Brewing Co., Karl Strauss Brewing Co. and Societe Brewing Co., in a beautiful outdoor setting. Breweries from Colorado, Illinois, Hawaii and more will be representing their homes states’ unique brew culture. To complement the wide selection of brews from San Diego and beyond, the festival will feature continuous live performances on two stages by seven popular local bands, including: the Bill Magee Blues Band, voted the “Best Blues Band in San Diego” by the San Diego Music Association, Ben Powell, who’s most recent album was nominated by the San Diego Music Association for 'Best Blues Album' in 2014, and renowned band leader Bubba McCoy. Outstanding local fare will be available for purchase from Brothers Provisions, Criscito Pizza, Currywurst Food Truck, GrillFellas Food Truck, Hana Hou To Go Food Truck and more.

“We are thrilled to offer craft beer fans another opportunity, in addition to Beer Week, to access their favorite breweries,” says San Diego Brewers Guild president Kevin Hopkins. “Rhythm & Brews grows larger each year- and this year will be no exception.” San Diego’s community of at-home brewers is invited to participate in the festival’s popular annual Homebrew Contest, sponsored by Mother Earth Brew Co. The ‘Best of Show’ will have the opportunity to brew his or her winning recipe at Mother Earth Brew Co. to be released at next year’s Rhythm & Brews event. Entry is open until April 19th and interested participants can register via Event Brite. Last year’s ‘Best of Show’ winner, Patrick Shulz, will serve his Contemplation Porter at this year’s festival. A portion of the Rhythm & Brews ticket sale proceeds will benefit Fight ALD, a non-profit organization dedicated to providing education about adrenoleukodystrophy. Fight ALD was founded by a Vista, CA couple who tragically lost their young son, Sawyer, to the deadly genetic disorder. In addition, the event will benefit the San Diego Brewers Guild to facilitate the organization’s efforts to bring attention to San Diego’s innovative brewing community and to elevate the craft as a whole on a national level. Advance tickets can be purchased via Event Brite and a limited number of tickets will be available day-of at the event. Entry includes unlimited craft beer tastings and a branded pilsner cup. VIP tickets are available for early entry at 11:00 a.m. and include access to the event’s exclusive ‘beer college’ sessions, including a special hands-on tacos and beer pairing demonstration with URBN Restaurant Group partner and executive chef Alex Carballo hosted by the San Diego State University College of Extended Studies Professional Certificate in the Business of Craft Beer program and a course led by White Labs covering biochemistry relating to yeast from the University of California, San Diego Extension’s Professional Certificate in Brewing program. Visit Event Brite, for all ticket options and pricing.

Getting Back to Nature with Wandervans Campervans

Tips For Foreigners Visiting The United States From Other Countries