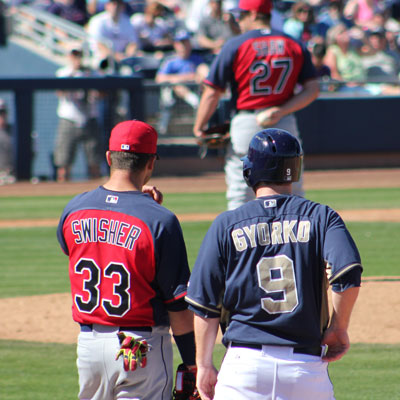 Ah, I've arrived in "Phoenix" for my first experience exploring this magical time of year called "Spring Training". My first stop is in Peoria where I quickly learned that while the Cactus League is based in the "greater Phoenix area", each town is different and has different things to offer. On this trip, we decided to try two different ways to experience Spring Training, so we started in Peoria Arizona - home to the San Diego Padres and Seattle Mariners.

Peoria Arizona is located in the north west side of greater Phoenix along Rt 101 between Surprise and Glendale.

While it plays host to the Padres and Mariners, it is also a short drive to Surprise Stadium - home of the Royals and Rangers, Camelback Ranch - home of the, Dodgers and Angels, and Maryvale Baseball Park, home of the Brewers.

Our home base for this leg of the trip was the Peoria Comfort Suites. It has a fantastic location, right off the highway and a short walk from the stadium and very close to a variety of restaurants including an IHOP.

While there is virtually no such thing as a "cheap hotel" during spring training, the Comfort Suites rack rate for this weekend was $199 / night, so for a suite consisting of a king or two queen beds and a sofa bed, that is fairly affordable if you are looking to pack the room with you and a few other guys. The room also features a fridge and microwave as well as free Internet and a basic breakfast in the morning so it really is a great home base for your spring training guys weekend.

To hammer this point home, we actually met a group of guys in the parking lot who had been coming to spring training in Phoenix for 30 years! While they haven't been staying at the same place all this time they had some great stories to share about how easy it was to meet current, hopeful, and past players and personalities. This included even having drinks one time with Chicago's own Harry Carey!

While things have changed over the years, this spirit of openness still exists here during Spring Training and you never know who you'll meet or what stories you'll be able to bring home.

When most people think of Cactus League Spring Training they probably think of the more popular areas such as Scottsdale, Mesa, and "Phoenix" itself. What we learned though after driving around is that while it's all metropolitan Phoenix, each area has a pretty distinctive flair to it. Peoria is less developed and so it is also less expensive, but it is still pretty well situated depending on what games you will be attending.

Right next door to the hotel is the Peoria Sports Complex which is home to the Seattle Mariners and the San Diego Padres. Opened in 1994, the stadium seats 11,000 and has separate club houses for the two teams.

Most of the Spring Training stadiums feature an extensive lawn area - perfect for a picnic or just to get some cheap tickets and stroll around while drinking your beer and chatting with friends :)

While many of the players you will see at Spring Training are from the minors or may never even play again, you will see veterans like Carlos Santana (Cleveland Indians).

Of course, the game is really only part of the experience of any baseball game and so let's explore the food!
Unlike over at Cubs park or one of the single-team stadiums, it is a challenge to bring a taste of San Diego to the Sonoran desert, but they did a pretty good job - from BBQ tri-tip sandwiches, garlic fries, and craft beer they did a great job.
While they also have the typical American lagers, Four Peaks was pouring four of their beers in the outfield and the stadium also had other craft beers on tap including Magic Hat #9.

On the Thursday that we attended our first game (Padres v Rangers) it was not a packed house at all so there was lots of opportunity to walk around and check out different seats.

As I mentioned above, baseball is more about the experience of going out to the park with your friends and to that point, Peoria Sports Complex actually has a mini field inside the stadium (right behind the stands) for the kids to play baseball. I am told that it is not uncommon for MLB hopefuls and former players to show up and guest pitch for these games.

Close and relaxed access to the players is really one of the greatest things about Spring Training for any mega fan and Peoria Sports Complex designed an alley that the players exit the field from that is perfect for fans to engage with the players to get autographs. While some players like Austin Adams (#73 below) has now been assigned back down to the minors it is just as likely that some new hot player may start here in Spring Training and one day be the next MLB star.

We had an AMAZING time in Peoria - thank you very much Visit Peoria for helping us find a room at the Comfort Suites and tickets for the Padres / Rangers game.
Peoria may not be as well known as some other parts of Phoenix, but it has a lot to offer and should be on your list of potentially base-camps for your Spring training guys weekend plans!
We are heading to Scottsdale next for a different take on Spring Training, so stay tuned!