The Abbey Resort in Fontana on Lake Geneva 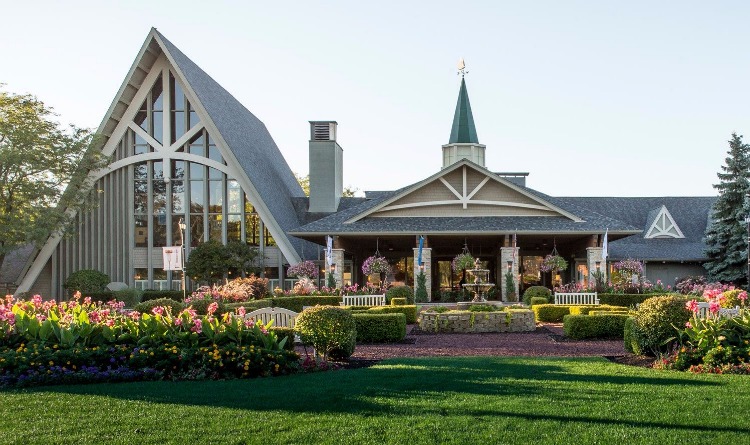 The Abbey Resort in Lake Geneva has positioned itself as the gateway to all the great fun that the Lake Geneva area has to offer.

This is the direct antithesis of the other well known resort in Lake Geneva, the Grand Geneva Resort. Grand Geneva, (the former PlayBoy Club!) offers nearly everything a guest could possibly want, all in one resort. Instead of competing directly with this, The Abbey focuses on providing a fantastic core resort experience and then connecting guests with all the awesome guys weekend activities in the Lake Geneva Area.

In warm months, this includes fishing, boating, a beach, water sports, golf, fine dining, and tours including visits to the Yerkes Observatory, home of the world's largest refractory telescope, or boat cruises around Geneva Lake. While this area might typically be considered a summer resort, I am told that one of the busiest weekends of the year is actually in Februrary for Winterfest and the annual snow carving competition. Additionally, the Lake Geneva area is also well known as the "Ice Boating Capital of the World" and there is no shortage of other winter activities, incl such as cross country skiing, snowmobiling, and ice fishing as well. Luckily the staff at The Abbey Resort can help you make reservations and arrange transportation for all of these.

As we explored The Abbey Resort it became clear that in addition to the activities and location they also offer a few very interesting unique features that makes it perfect for a guys weekend, the two that stand out the most for me include, the Sanctuary Suite in the Aveni Spa, and their BBQ "Pit Master" Matthew Whiteford who brings award-winning, authentic BBQ to The Abbey Resort. 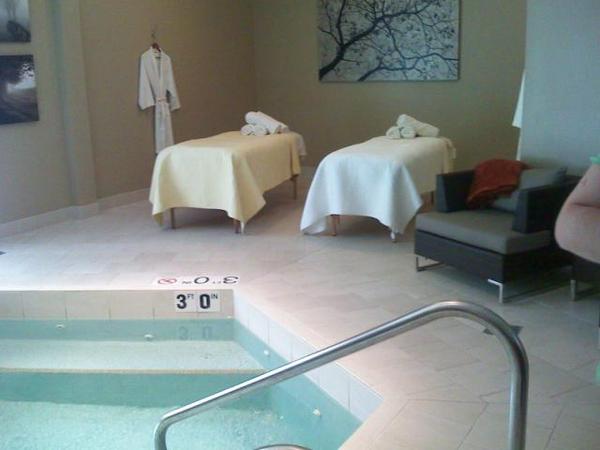 AVANI Spa, not just for the Girls!

Typically spas aren't manly and are a place more suited for girls weekends than for men to enjoy. However, imagine a guys weekend where you and your buddies get massages and relax in a private whirlpool while watching football or NASCAR and enjoying beers and ribs. Certainly spas for men are starting to make their way into the mainstream world and I am super excited.

Your wife might cringe at the thought of this, but this would make a fantastic experience for a guys weekend getaway or bachelor party.

Rates for this private room start at just $100 per hour plus the cost of spa services, food, and beverages.

As this was my first time experiancing a "spa treatment" I wasn't really sure what to expect.

Like many of you, I have had a manicure or two, but getting dressed in a robe and laying down in a dimly lit room made me a bit nervous for my first facial. As you know, I am pretty much an "every day guy" so if I enjoyed the experience, you probably will too.

BTW don't worry, you won't leave smelling like a flower, but you will feel real nice and relaxed afterwards!

The only negative is that the women's side of the spa had several amenities that our side doesn't - including a "spinner" to dry swimming suites faster, an inhilation room where you could receive aroma therapy, a Swedish Shower, and a private "women only" hot tub. Don't worry too much though, we lost our hot tub to what has become the Sanctuary Room and I think that is probably much cooler anyhow.

Seriously though, the staff at the Avani Spa are fantastic and are developing even more spa packages designed just for men that I'll be sharing with you in the near future! 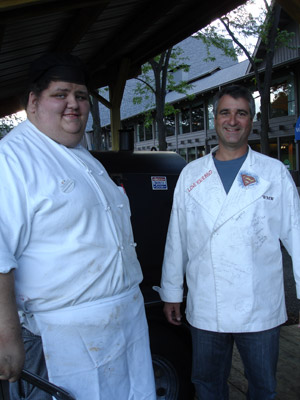 The second feature that makes The Abbey Resort our choice for a great guys weekend is Matthew Whiteford and their Burnin' Down the Docks event every Sunday, also known as Blues, Brews, and BBQs. You really can't get much manly than BBQ - and I am not talking about just plain ol' stick the meat on a grill or in the oven BBQ. I am talking about honest to god, good ol' BBQ with a real smoker and a real pitmaster who understands that it's about the experience, not just the sauce.

Burnin' Down the Docks is held every Sunday during the summer from 1-6 p.m. and features BBQ pork sliders, Leinenkugel specials, and live music. Truely this would make the perfect ending to a fantastic guys weekend!

In addition to this special event though, the menu at the Fontana Grill is fantastic and has a good variety of steaks, fish, and game including duck and fresh venison (seasonally). During our trip, we were honored to have had the opportunity to sample several entrees and sides. Based on this sampling I can assure you that you will not leave hungry, but you will leave wanting to return the next night.

After dinner you might want to also check out the Helm (bar) or Steamers, the Abbey's on-site cigar bar to finish off the evening sharing stories and planning tomorrow's activities.

Wherever you go at The Abbey Resort there is something great for the ultimate guys weekend - on-site amenities, off-site activities, and awesome staff at all levels of the resort. Combine this with a resort only 90 minutes from Chicago that you don't even need to drive to (The Abbey Resort has a free shuttle from the Harvard Metra station) and you have a winner that should be on the top of your list for the perfect midwest mancation.