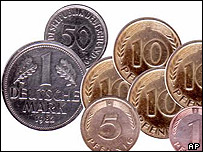 COMPANY IS NO LONGER IN BUSINESS

Recently I was contacted by The Currency Commission, a firm based Washington, DC and London. This company buys old money from European countries that now use the Euro instead of Marks or Lira etc. I didn't realize it until they contacted me, but all that old money you might have laying around from years past is now essentially worthless because you can't trade it at traditional currency exchanges or banks because the deadline has passed. However, there are billions of dollars worth of these old european currency notes floating around in sock drawers, used as bookmarks and essentially forgotten about.

That's where The Currency Commission comes in. They will buy your old foreign currency for slightly lower than the market was, and then they have a special relationship with banks so they can sell it back in bulk. So if you have money laying around from that European mancation years ago now you can trade it in and finance your next guys weekend or European Mancation!

How did you guys come up with this idea?

The idea came out of and article and an ad in a business magazine. The article was talking about the Euro zone and how it was changing the face of business in Europe. In the same magazine there was in the back, an ad for one of those places that buy old/broken gold. After reading the gold ad for a few minutes the general idea started to fall into place. Gold places purchase gold at a discount to market value. The same basic idea applies to the Currency Commission, on a more specialized level. When countries switched their currencies to the euro, individuals/businesses were given time to convert their money, however this exchange period has long since passed. As the exchange period passed, so did the ability for anyone to go into their local financial institution to convert the now non-legal tender banknotes. This gap became The Currency Commission's business model.

What is the coolest mancation or guys weekend you have been on?

The coolest Mancation...hummm....I would have to say a working vacation to Las Vegas about three years ago. I had never been to Vegas before and was completely astonished by the shear size of the hotels and the fact that the city did not seem to close. A couple of guys that I met out there would hang out after work. It amazing how quickly you can "click" with people that you've never met before and start talking as if we had been friends for years. That was one of the reasons that I enjoyed the vacation so much.

Is The Currency Commission just for retired European currency, or do you also accept currency from other countries that may have changed governments etc.

The Currency Commission is currently focused on European currency, however would expand this to other currencies if there is a demand. The reason for focusing on Europe is just for the volume of people people who still have these banknotes in sock drawers, desks and wallets. We know that there is the of billions of euro equivalent non legal tender currency out there. We have just made it extremely quick and convenient for people to get value for a dead currency.

Which currency do you see the most of?

There is a good mix of European and International clients. The bulk of our clients are individuals who had left-over banknotes, but there are businesses who also have submitted their banknotes to us.

Is there a typical transaction value that you find?

Generally the transactions have a value of 50 to 200 euro. However we have completed transactions that were as little as 5 euro and other worth over 1000 euro!