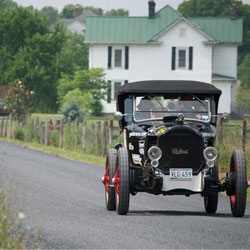 TRAVERSE CITY, MI – On June 23, as many as 100 classic automobiles will drive past the starting flag in Traverse City for The Great Race, a nine-day 2,300-mile road rally that will take them through Ontario, New York, Pennsylvania and Ohio before ending in Henry Ford’s hometown of Dearborn on July 1.

“The contestants are as excited as I’ve ever seen them,” said race director Jeff Stumb. “The route is great, the destinations are great. We have over 90 vehicles signed up already, and there’ll be over 350 people coming through just as part of our travel caravan.”

The Great Race was started in 1983 when 69 motorists made the first trip from Los Angeles to Indianapolis. (It takes its name from a 1965 film starring Natalie Wood, Jack Lemmon and Tony Curtis.) The rally gained a huge following from late night showings on ESPN, as subsequent rallies went from Disneyland to Disney World, Norfolk to Seattle, Ottawa to Mexico City and other routes, always following scenic local highways rather than high-speed interstates. After a brief hiatus, the race  was revived under new leadership last year with a successful run from Chattanooga to Bennington, VT.

Over the decades, the Great Race has stopped in hundreds of cities big and small, from tiny Austin, Nev., to New York City. But the race has never been to Traverse City or the Upper Peninsula of Michigan.

“When the Great Race pulls into a city it becomes an instant festival,” Stumb said. “We have seen as many as 40,000 people at stops, like in Huntington Beach, Calif., and Sioux Falls, S.D. But more impressive than that is when we roll into small towns like Fayetteville, Tenn., with a population of 5,000 and there are 7,000 people cheering for us on the downtown square.”

The 2012 Great Race starts in Traverse City and makes it way north into Canada by the start of the second day, where it travels east toward the Canadian capital city of Ottawa before turning south to re-enter the United States at Thousand Islands, NY. From there, the event will make its way west through Pennsylvania and Ohio before finishing on July 1 at The Henry Ford Museum in Dearborn. 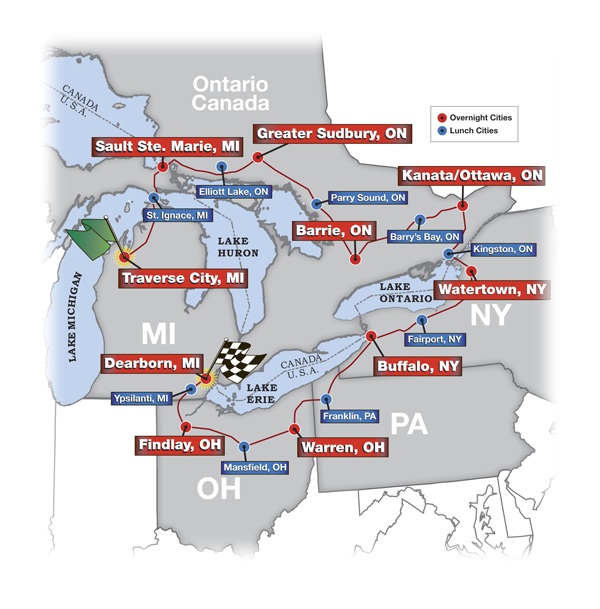 The rally is not really a speed race. Instead, each vehicle is provided with a driver and navigator who are given precise instructions each day. Following specific course instructions, teams navigate through 4 to 7 timed checkpoints each day. Their arrival time at each checkpoint is recorded and compared against the perfectly driven route, with each second off the perfect time, (either early or late) counted as penalty points. The winning team is the one with the lowest overall score (the most accurately driven route) at the end of the event.

Participating autos must have been built between 1911 and 1969, and most are prewar vintage. The 2011 winner was the first 100-year-old car to enter the race – a 1911 Velie owned by Howard Sharp of Fairport, NY. This year’s oldest entrant to date is a 1907 Renault driven by Alan and Mary Travis, followed by three 1916 Hudsons: a four-passenger speedster, an Indy racer and a Hillclimber.

The age of the cars is part of the rally’s appeal, says Stumb. Contestants like the fact that the older vehicles benefit from a scoring handicap that reduces the advantages of more recent models. And spectators enjoy seeing elderly automobiles out on the road and not just in parades and museums.

But contestants don’t simply compete to have a good time – there are some fair purses up for grabs in this race. A total of  $118,500 will be awarded to winners – including a guaranteed minimum of $25,000 for this year’s Grand Champion.

Local car aficionados and officials of Hagerty Insurance (the world’s largest insurer of collector cars and boats) are preparing a wide array of events and celebrations to mark the start of the rally. Hagerty is a major sponsor of the event, and the reason race organizers chose Traverse City as the starting point for the 2012 event.

“Once they invited us here we knew right away it was the perfect location,” said Stumb. “I am still amazed at the beautiful scenery in this area of Michigan.”

The cars will arrive in Traverse City several days before the June 23 start of the race. The Holiday Inn West Bay is serving as race headquarters for meetings and technical inspections. On Friday, June 22, the cars will participate in an annual Trophy Run to Empire and the Sleeping Bear Dunes that will give drivers, navigators, crews and staff some practice before the official start on Saturday.

The official Saturday start will be held on Traverse City’s “main drag,” Front Street, which will be closed to normal traffic for the day. The start is free to the public and will begin at 8:30 a.m. with the first car leaving on the 2,300-mile excursion at 10 o’clock. During the 90 minutes between the initial lineup and the departure of the first car, spectators can visit with the drivers and look at the cars. At this family-friendly gathering it’s common for kids to climb into the cars for a first-hand look, said Stumb.

For more information, go to www.greatrace.com. To learn more about other summer attractions and events in the Traverse City area – and for a complete listing of other lodging and dining options – contact the Traverse City Convention & Visitors Bureau at 1-800-TRAVERSE or on line at www.TraverseCity.com