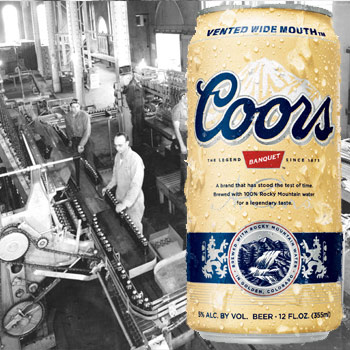 In 1859, prospectors discovered large quantities of gold throughout the Rocky Mountains, and ’s gold rush was on. The search for gold led to the founding of many new communities, including Golden, the birthplace of Coors Banquet.

Now Coors is celebrating the 150th anniversary of Colorado’s gold rush with a contest that every guy should love - a trip to a brewery and beer for a year! Coors Banquet, which began quenching miners’ thirst in 1873, is giving its fans a chance to strike gold. Through an online sweepstakes running now through Sept. 30, Coors Banquet Facebook fans will have the opportunity to win a one-year supply of Coors Banquet*, a VIP trip for two to the Coors Banquet Brewery, a book about Golden and a live goldfish named Banquet.

So if you are looking for an awesome Rock Mountains mancation this is an opportunity you shouldn't ignore!

“On this 150th anniversary, we proudly hold up a Coors Banquet to toast the men and women whose hard work and sacrifices led to the formation of Golden and so many other great cities throughout Colorado."

Rocky Mountain water and two-row, high-country barley are the most important ingredients in our brewing process” said Keith Villa, MillerCoors brew master. “We’re excited to welcome one of our fans to experience firsthand the care and dedication our team puts into brewing this classic beer.”

Coors Banquet is brewed in the same brewery in the base of the Rocky Mountains where Adolph Coors introduced it in 1873.  As legend goes, area miners would throw parties during the 1800s called “banquets.” Coors was the beer of choice for the thirsty miners, and it quickly earned the nickname “banquet beer.”

And if you win, let me know ... I would love to add your photos and story to Man Tripping!