Put on the B.R.A.K.E.S. and Arrive Home Safe Every Time 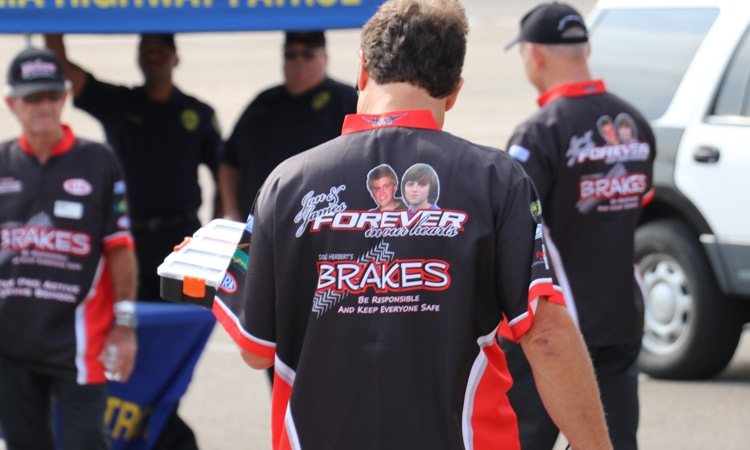 Driving safely is one of the most important things you can do, but honestly most of us learn by surviving accidents and "near misses". Sure, your drivers education class that you (and likely your kids) took at school teaches you how to operate the vehicle but it is mostly under ideal conditions. What happens though when the driver is distracted, the road surface is slick, or something causes your car to temporarily lose control? These aren't hypothetical ... they are REAL conditions and like anything in life, you can can't simply avoid them. The only solution is to teach drivers how to reduce risk while teaching them how to manage situations when they arise.

That's what I absolutely LOVE about B.R.A.K.E.S. and I wish they had an adult version too. There are a lot of skills that I've picked up through time on the track or simply having learned through surviving situations. For young drivers today and their parents (yes - parents also take part in a B.R.A.K.E.S. session!), this could truly be the difference between life and death. Sadly, that's not just hyperbole - it's the reason the entire organization exists as car crashes are currently the number-one cause of death among teens in the United States.

While we attended in San Diego, they have classes across 40 states and three countries. In fact, this week they just reached a milestone of 20,000 students trained! On and did I tell you yet that it is absolutely free to attend? 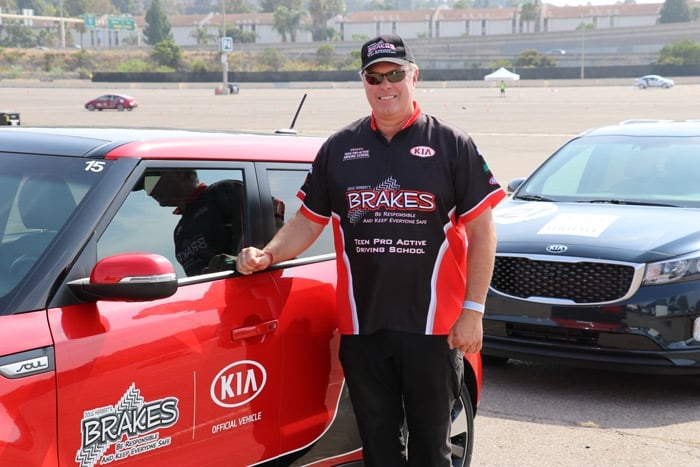 Doug Herbert, B.R.A.K.E.S.'s founder raced Top Fuel dragsters from 1992-2009 including 10 national events and 28 career final round appearances. He and Matt Reilly (Director of Operations) both have tragically personal connections to the organizations. Doug lost his two sons eight years ago in a car accident and Matt lost his mother-in-law to a distracted teen driver and more recently the loss of his daughter's boyfriend who was a passenger in a car crash with a teen driver at the wheel. I feel like this personal connection to the cause as well as Doug's personal passion for driving and automotive sports have come together in a way that is both personal to both of them but uniquely powerful. 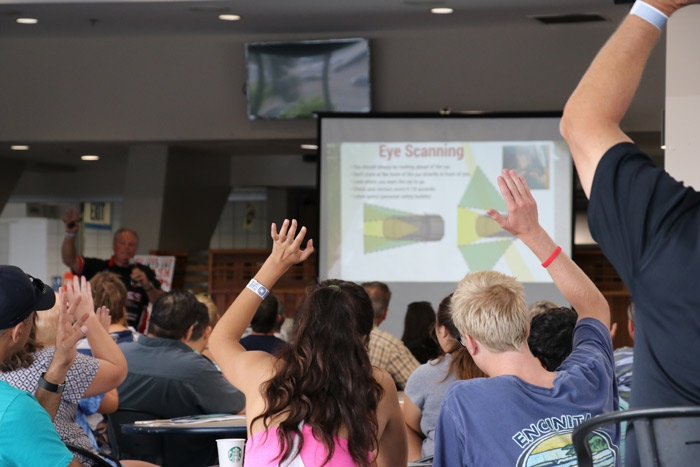 On event day, the training begins with a classroom setting where Doug, Matt, and other professional drivers review driving fundamentals such as the importance of keeping eyes on the road as well as how to prevent oversteer and other skills related to managing risk while driving. It was reminiscent actually of the type of pre-race meetings you might experience at a track and instead of it simply being some old guy with minimal skills - they featured an actual police officer during part of the session.

The fact that police were integrated into this event I think also makes things less scary when you meet an officer for the first time on the road as well. There's a lot of mystique around the police and plenty of fear since most of the time you try to avoid them since you only meet face to face when you are in trouble. By having them in the classroom sharing real-life stories and then out on the track as well it helps bridge the gap. Honestly, from most officers I talked with, they don't want to stop you for speeding and they certainly don't want to have to call parents to tell them their child has been killed. We're all on the same side here and that's a very important thing to remember that is often forgotten in life. 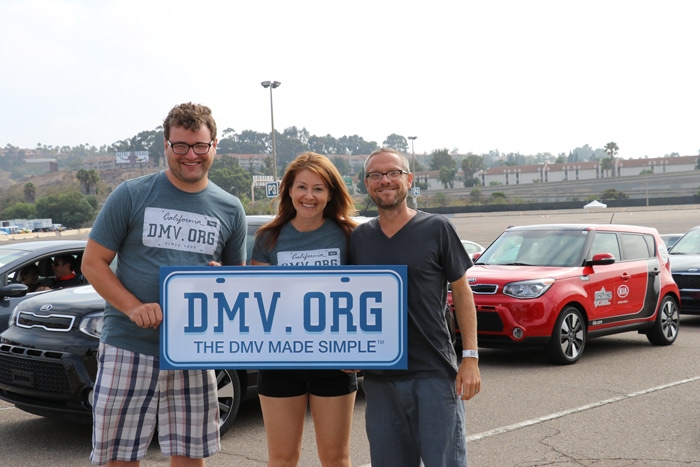 We're not the only ones out there that are passionate about supporting B.R.A.K.E.S., the day I was there, DMV.org donated a check for $30,000 and provided two-dozen volunteers to help make the event a success. 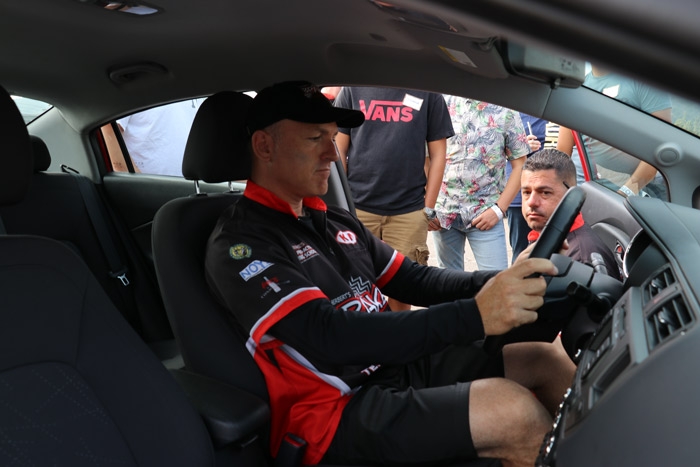 Out on the track, it was time to take that classroom learning and apply it to real-world conditions. Since KIA is a huge sponsor of B.R.A.K.E.S., their cars - SOUL and Forte - were used. While training included how to recover from a skid, proper braking, managing distracted driving, panic stop, accident avoidance, and even "drunk goggles", there were little things like proper seat, steering wheel, and mirror positioning.

One thing I learned is that "10 and 2" is no longer the preferred hand pattern for the steering wheel. In the time since I had driver's ed airbags have become ubiquitous and at 10 and 2, your hands will fly into your face at 200 mph when the airbag releases. By shifting the position to 9 and 3, your hands will go out and avoid hitting your face! 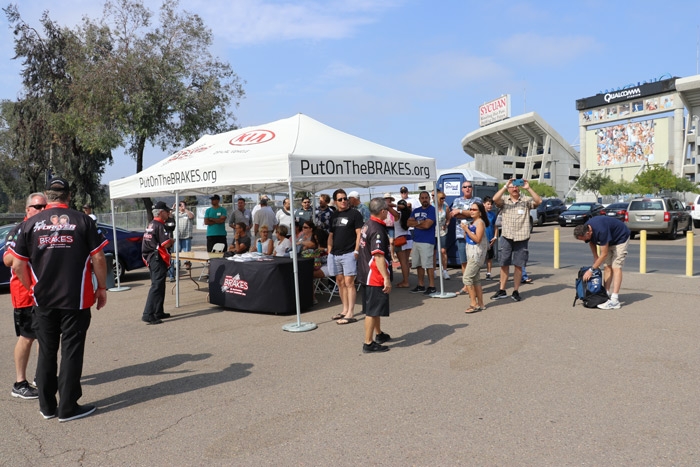 While the kids are going through the skills training, parents can watch ... and then they get their chance to practice as well so that they have a better understanding of how to drive more safely too. 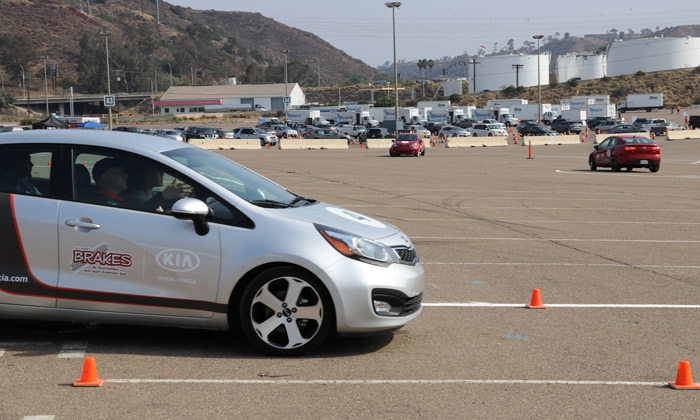 Unfortunately I didn't get to drive here but I've done similar exercises and it's something that everyone should experience! You can find a list of local events near you on their website. While you can't put a price on saving someone's life by managing a dangerous encounter. Think of it this way since your only cost is four hours on a weekend, how many hours will you waste even over a minor accident?

That's not just talk - teens who graduate from B.R.A.K.E.S. are approximately 64% less likely to get into a car crash within the first three years of driving!