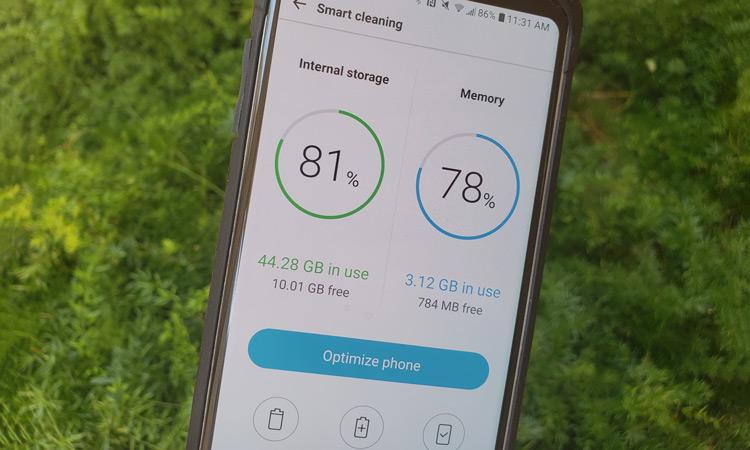 When you first open that shiny new phone, there’s so much excitement. You can flip through screens super fast, apps open instantly, and that money you just spent feels like the best investment ever. Over time though, your Android phone performance will start to slow down. Here’s our advice on how to make Android phones run fast again and improve performance.

Before you sell your cell though, let’s try these fixes to help make it faster and squeeze out some extra performance so it will last till the phone you REALLY want to upgrade to is available.

Why Do Android Phones Get Sluggish?

The easiest answer to why Android phones can slow down over time is that apps, user data, and system updates fill more of the phone than when you first got it. These apps use more storage space, more ram, and more CPU time each time they are upgraded.

Additionally, adding more apps just compounds this competition for resources and that slows the phone down two. This is especially the case when there are multiple background processes all trying to use the CPU at the same time. For instance, if you have several social media apps and are streaming music while using Google Maps to find out where to go, there can be a lot of stuff going on that you might not even think about. Even though you have Google Maps open – Facebook, Twitter, Instagram, and Gmail are all still connecting to the internet looking for updates and using the GPS to tell where you are located.

NOTE: the following tips to make your phone run faster are based on my experience with an LG V30 running Android 8.0.0, the location of some of these functions may differ depending on your phone, carrier, and system version.

How to Speed Up Your Android Phone

Now that we know what factors can lead to it getting slow, let’s look at how we can fix that and make your Android phone run fast again.

This could be an entire article by itself, but essentially the goal here is to not just reduce the storage space being used but also the other resources such as CPU, GPU, and Internet Radio. By reducing the number of apps that are active at one time you can speed the phone up considerably. The easiest way to do this is go into the App Info section of Settings and 1) turn off notifications 2) Force Stop or 3) Uninstall the app entirely.

Force Stop is a good starting point if you aren’t sure if you may still be using the app occasionally. Similarly, if the app is clogging up your notifications you can turn that functionality off right there too. 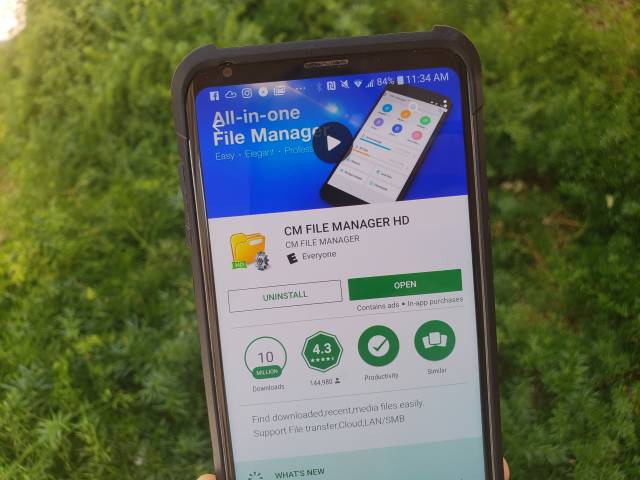 Files Go is an absolutely fantastic app provided by Google. It can help you clean up junk files, duplicate files and even show you how much space you can free up by removing photos from your phone or moving files to an SD card. It can also help you identify Unused Apps and uninstall them …

Chances are that your phone came with a bunch of apps that you don’t need, don’t want, and maybe don’t even know what they do … and then you added even more. Cleaning up the clutter can help reduce storage space and that helps your phone run faster by providing more space for the apps that you want.

This is an easy one, make sure to always keep your apps updated. This includes not just making sure to install the latest version of Facebook, but also installing the latest system updates and security patches.

Google is doing a great job of making each version of Android more efficient and squashing bugs so this is one of the most important things you can do.

Consider Switching to a “Lite” Version of Your Favorite Apps

For older phones and newer budget phones, you might consider swapping out Facebook for Facebook Lite for instance. While you may sacrifice some visual features and other functionality, the core app will still be there … but now much faster. Other apps have similar Lite versions that you can check out too. 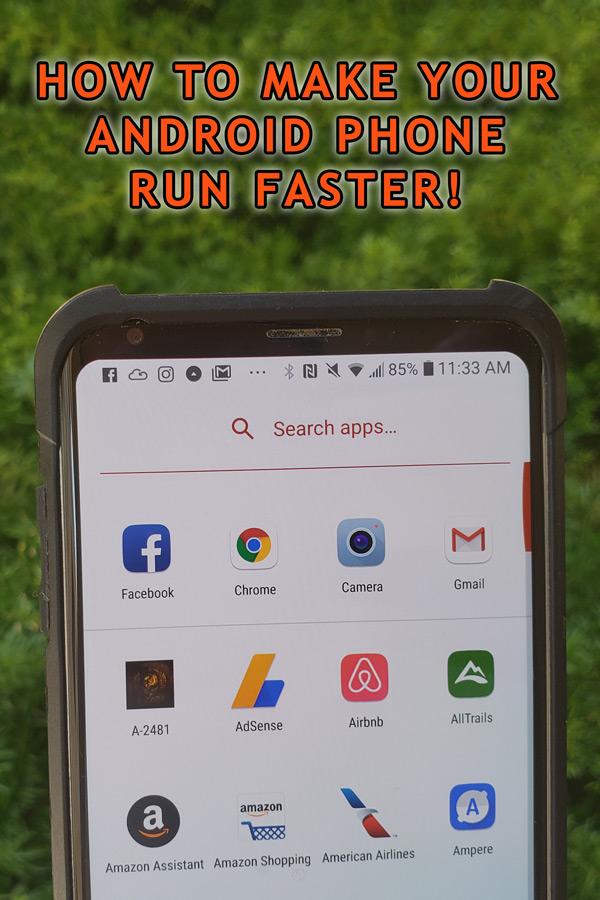 Each manufacturer – and sometimes even carriers – offers a slightly different “Android” experience. This includes pre-installed apps but it also comes down to the overall interface itself. In Android, this is generally referred to as the “launcher”. Some manufacturers such as Motorola have an experience that is very close to stock Android and of course, the Pixel phones from Google are stock Android. Other manufactures like Huawei and LG as well as older Samsung phones though can actually slow down the phone by offering customizations and features that they believe make the experience better for their users.

Ultimately though, even though I LOVE my LG phones, the first thing I do is install Nova Launcher so that I can optimize almost all aspects of the interface and make it faster. Another great option is Action Launcher. Not only will this speed the phone up, but it will also make the experience of using your Android phone faster and more efficient too.

Clean Up Your Home Screen and Turn Off “Cool Visual Features”

I absolutely love Android phones for how amazingly customizable everything is – and using a custom launcher like Nova Launcher can make that even better. However, even without that there are features like live wallpapers that can make your phone crawl (especially if you have an older or budget device). Once you turn off live wallpapers as well as animations and other flourishes, you’ll find that that apps will open and close much faster and swiping will be much smoother.

Another area to optimize here is the always-on display. While that won’t necessarily make the phone faster, it will help extend battery life 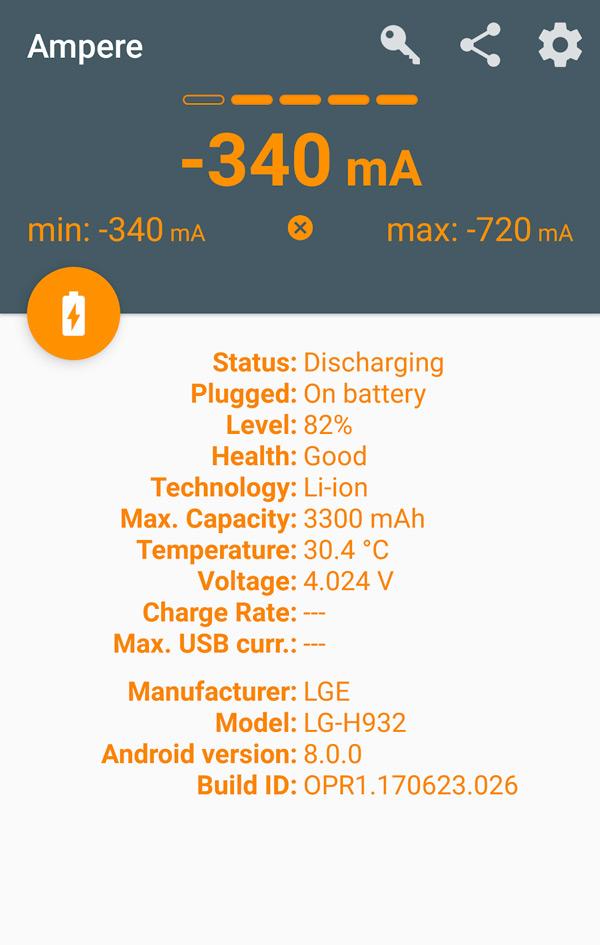 While this won’t directly make the phone FASTER it will help identify what is making the phone slower and it will improve the overall performance. To check on how the apps are using the battery, go to Settings -> Battery and look under “App Usage”. If you see an app using a strange amount of battery then that might be something slowing your phone down. Simply tap and close it or use this knowledge to do further investigation such as updating the app to its latest version.

Additionally, under Battery, you’ll find “Power Saving Exclusions”. This will allow you to exempt certain apps from any power savings plans you might have in place. That will help make an individual app run faster even though the phone itself is trying to conserve battery.

Not all phones have this ability easily accessible, but if you have a phone such as my LG V30 then you’ll be able to reduce the resolution from “High” (2880x1440) to “Low” (1440 x 720). This will help the battery last longer as well as the system run faster since the GPU has less work to do.

Turn Off Any Radios That Are Not Needed

Anything that is not needed could be slowing down your phone. This includes: Bluetooth, NFC, and even GPS. Potentially, if you are at home you can even turn on airplane mode which turns off the cellular signal and rely on Wifi only. This will help reduce resources being used and make things faster too.

Do Not Install Optimization Apps Promising to Make Your Phone Faster

There are literally thousands of apps on the Google Play Store that promise to make your phone faster. These include Battery Optimizers and Task Killers that when used improperly can cause your phone to use MORE battery, slow the performance of your phone, and in some instances actually cause physical damage. Instead, I recommend familiarizing yourself with the optimization apps provided by your phone manufacturer and using those to adjust performance.

With regards to Task Killers – while logic suggests that you can kill apps that are “open” and the rest will be faster as a result of more RAM, that’s generally not true. Unlike Windows where apps are “open” or “not open”, in Android apps that are not open are not being used – though they may stay in RAM so that they can open faster when needed.

By closing them, you are actually making the system use more battery and take longer to open them when they are needed.

There are more technical details here but that’s for another article. Instead, to make these apps faster you should focus on deleting apps that aren’t needed anymore.