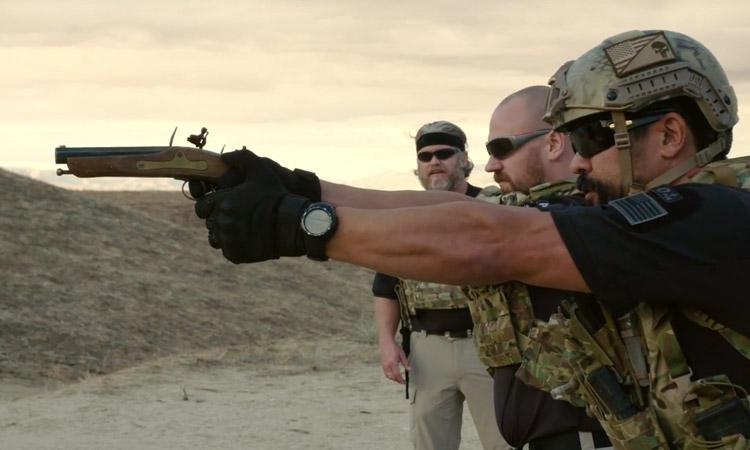 Have you ever wondered what would happen if you took modern special forces operators and sent them back in history to fight epic battles with period equipment and modern tactics? That's exactly what Time Warriors is, but even better is that since it's a nimble company relying on OTT streaming for distribution they can produce the content that the audience wants. For instance, while their first series of episodes features the team preparing for battle against 18th-century pirates and ultimately capturing Blackbeard future battles need your input. Will they fight Nazi's, Vikings, or even Confederate soldiers from the American Civil War next? That's for you to decide!

While this concept seems a bit "out there", the team is actually pretty amazing and includes tech and media veterans such as Daniel Weinand (co-founder of Shopify), Mike Janke (tech entrepreneur and co-founder of cyber security company DataTribe as well as being a former member of SEAL Team 6), along with Matt Bartley (director of series such as "The Apprentice" and "The Biggest Loser", and Chris Campbell (former Mark Burnett Productions and Endemol Shine Group executive with experience on shows like "Survivor" and "MasterChef"). That's some serious experience that has come together to create innovative programming that truly kicks ass and takes names.

Time Warriors Episode 101 - Introducing Mike "Odin" Janke and the concept of the show.

To find out more about Time Warriors and NuBlu TV's offerings, we talked with Mike "Odin" Janke who is also the Team Leader of the special forces team featured on the show.

What inspired you to create Time Warriors?

In my career in Special Operations, we study, refine and analyze tactics of history. Apache Indians, African tribes, Vikings, etc. We often talk about specific battles and break them down to analyze the strategies. This always leads to discussions about “what would we have done? What if 5-10 of us were inserted into that specific time in history?”. We wanted to show the “flaws and failures” that also happen, not just the movie-like hero always wins side of this job.

Why OTT instead of partnering with a distribution company?

When Daniel, Matt, Chris and I first filmed Time Warriors, we had many studios and networks offer to produce it, however as the discussion continued - they wanted to change it for “broad viewer consumption” and it would be a completely different, canned type of show. We didn’t want that and we felt that with our technology background, we could take everything we like about Reddit and everything we like about what we would watch, and present it for free to audiences. We feel strongly that there is a problem that is not being solved. Viewers want to “binge” watch, not wait for next week to see the next episode - and they want to engage, give suggestions and have a say in the plot/characters and challenges. We feel that NuBlu is our attempt to solve that problem. We feel OTT is where customized, white-glove content can best be served to an interested audience.

What other Time Warriors match-ups do you have coming up?

We have presented 3-key historical battles that we allow our audience to vote on: Defend the Alamo, Assassinate Hitler, and stop the Viking raid of France. We will tally all of the votes and announce what the audience has chosen as the next series. Make sure to visit the forum and vote so you can have your voice heard!

What is your favorite period weapon?

For me, it is the Blackfoot indian Bow. they could take down an elk or buffalo with it, shoot from a running horse and it was silent.

If you were going to take the Time Warriors team on an epic mancation, where would you guys go?

I love that question. I think we would all like to go to Normandy and scale the cliffs to see the problem first hand as well as Thermopolae, to see where the Spartans held off the army. Or we could just do a week of skydiving, shooting and sitting around a campfire bullshitting.

What settings do you most look forward to staging Time Warriors battle? (mountains, jungle, desert, water etc.) and why?

For me, I look forward to a Mountain setting, very difficult terrain and we can showcase our climbing skills. The water is a tough environment to succeed.

Did you ever stage fantasy battles as a kid with Gi Joe vs He Man toys? What was your favorite match up there?

Let the Time Warriors Know Who You Want them to Fight Next ...

Make sure to also visit the campaign landing page at #MenWhoBlog for more information about NuBlu TV and links to interviews with Mike conducted by other bloggers.