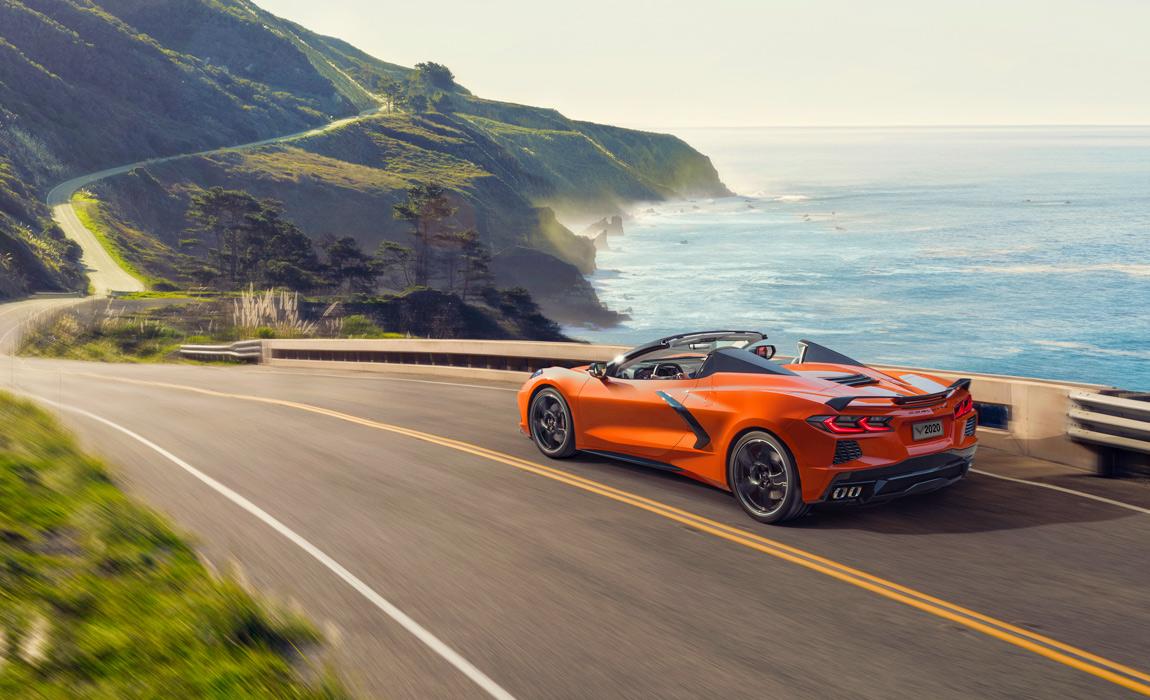 Chevy is doing a slow reveal of possibly the most hotly anticipated car to hit the roads for the 2020 model year. A few weeks ago we were on hand for the reveal of the hard-top Stingray C8 Corvette and now they've released an even more awesome looking convertible version. Check it out ... 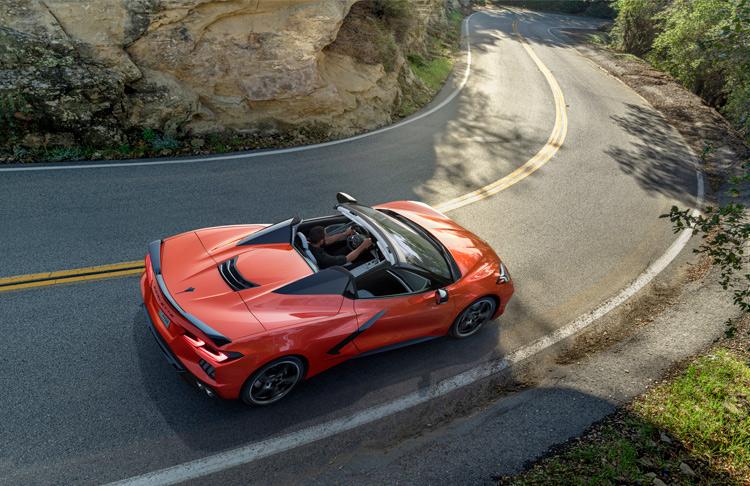 “We put the world on notice when we introduced the first mid-engine Chevrolet Corvette a few months ago, and now we’re raising the bar with the first-ever hardtop Corvette convertible,” said Brian Sweeney, Chevrolet U.S. vice president. “And the convertible will be priced only $7,500 more than entry 1LT Stingray coupe.” 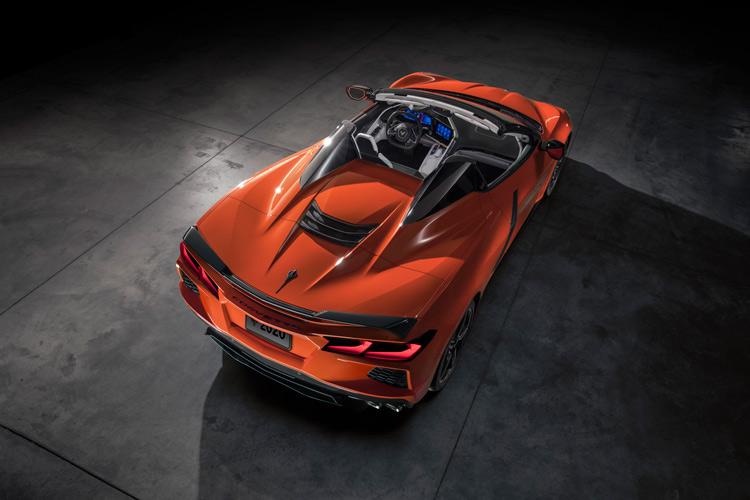 First and foremost, a convertible

The mid-engine 2020 Corvette Stingray was engineered first and foremost as a convertible. The convertible maintains the tunnel-dominant structure and use of high-integrity die-cast parts found in the Stingray coupe.

The team engineered the hardtop to stow seamlessly into the body, maintaining the Stingray’s impressive ability to store two sets of golf clubs in the trunk even with the top down. The convertible also keeps the coupe’s front storage compartment, which can fit an airline-spec carry-on and a laptop bag.

The hardtop provides a quieter cabin, increased security and a cleaner look compared to the previous soft-top designs.

“Our goal from the beginning was to make sure customers didn’t have to sacrifice any functionality, performance or comfort when choosing the hardtop convertible,” said Josh Holder, Corvette program engineering manager. “We managed to keep the same design theme as the coupe, as well as the exceptional storage capacity and track capability.” 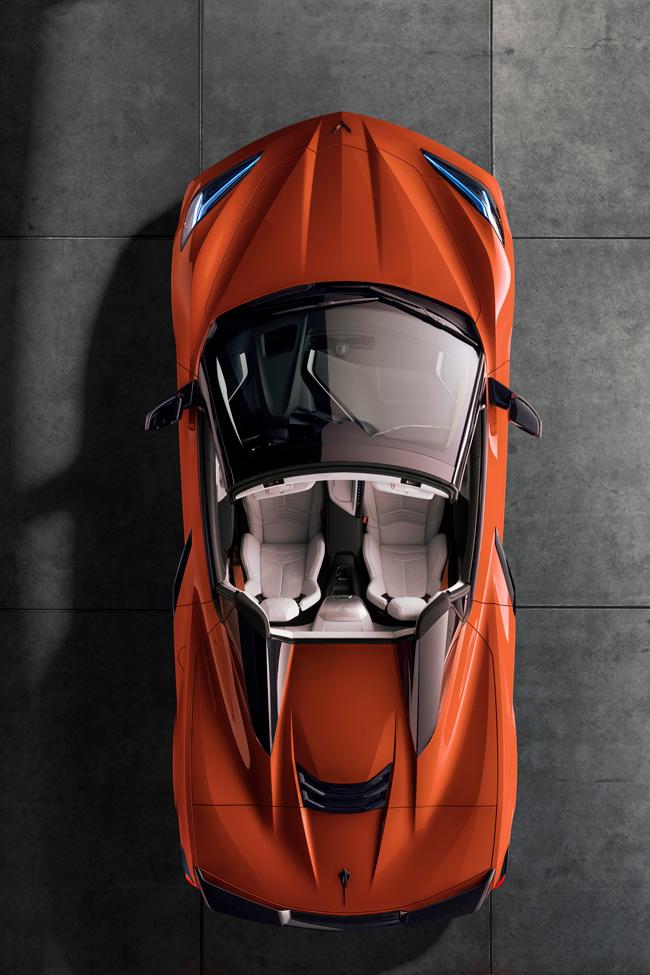 Like the coupe, the Stingray convertible’s design was inspired by fighter jets. The tonneau cover features aerodynamically shaped nacelles influenced by the housing used for jet engines. The nacelles, which were also used as inspiration on the Chevrolet Engineering Research Vehicle (CERV) I and II, as well as the Corvette SS and SR2 concepts, help reduce air recirculation into the cabin and provide a remarkably exotic profile with the top up or down. The tonneau also provides a rear power-adjustable window and a vent for mid-engine cooling.

The two-piece top can be activated at speeds up to 30 mph and retract in as few as 16 seconds. It is powered by six electric motors — a Corvette first — and uses encoders for precise control. Switching to electric motors from hydraulic systems helps increase reliability. A body-colored roof is standard, while Carbon Flash metallic-painted nacelles and roof are optional.

Careful attention was paid to make sure the engine could breathe when stored underneath the tonneau cover. The sheet-molded composite top stows in a compartment made from lightweight composite panels and heat shields to manage heat from the engine.

A divider glass window in the middle of the vehicle can be power adjusted with the top up or down. The glass has been optimized to reduce air recirculation and wind noise in the cabin for improved quietness. The roof system design, combined with the same rear spoiler used on the Stingray coupe’s Z51 Performance Package, results in identical drag between the coupe and convertible with the top up.

Engineers tweaked the chassis for the convertible, with springs and dampers tuned specifically to provide nearly the same performance as the coupe. 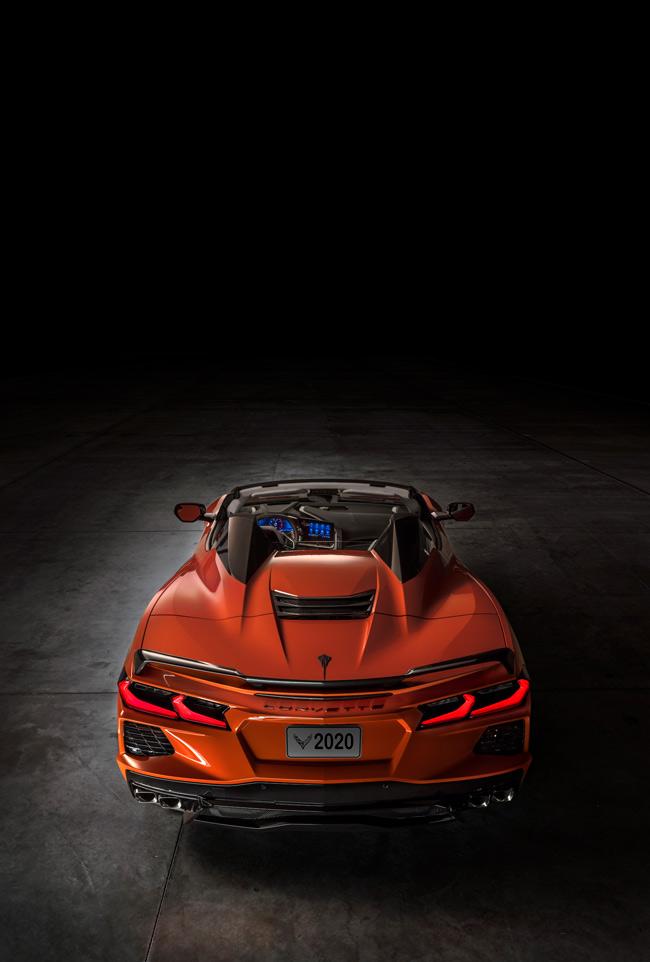 Like the Stingray coupe, the convertible is powered by the next-generation 6.2L Small Block V-8 LT2 engine, the only naturally aspirated V-8 in the segment. It will produce 495 horsepower (369 kW) and 470 lb-ft (637 Nm) of torque when equipped with performance exhaust — the most horsepower and torque for any entry Corvette.

The LT2 is paired with Chevrolet’s first eight-speed dual-clutch transmission, which provides lightning-fast shifts and excellent power transfer. This transmission is uniquely designed to provide the best of both worlds: the spirited, directly connected feeling of a manual and the premium driving comfort of an automatic. The double-paddle de-clutch feature even allows the driver to disconnect the clutch by holding both paddles for more manual control.

When combined, the advanced propulsion system, revised chassis tuning and retractable hardtop make the 2020 Stingray the most no-compromise Corvette convertible in history. 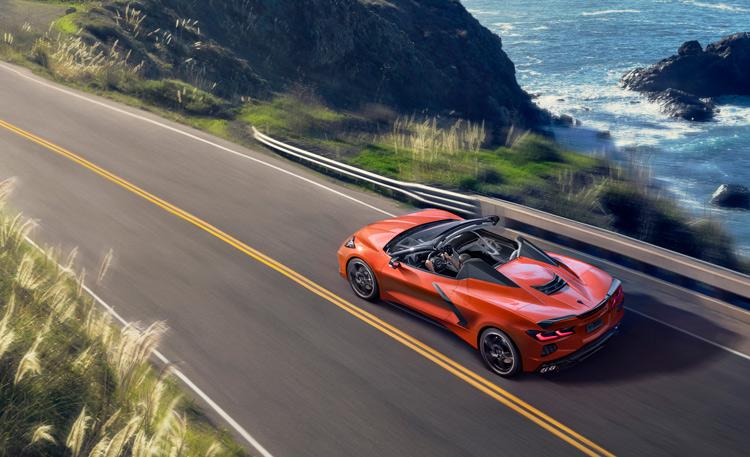 Interested Stingray shoppers can now build and price their own Corvette coupe or convertible on the 2020 Corvette visualizer at Chevrolet.com.

A dedicated Chevrolet Corvette Concierge team will provide 2020 Corvette customers with answers about the vehicle discovery, buying and ownership process. The team can be reached by calling 866-424-3892. Customers can also live chat with a Corvette Concierge by visiting Chevrolet.com. The team is available from 9 a.m. to 9 p.m. EDT Mondays through Fridays.

The 2020 Chevrolet Corvette Stingray coupe goes into production at GM’s Bowling Green Assembly in late 2019, with the convertible following in late first-quarter 2020. A right-hand drive version of the convertible will be available in select international markets at a later date. 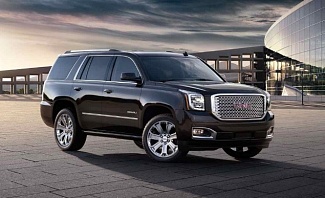 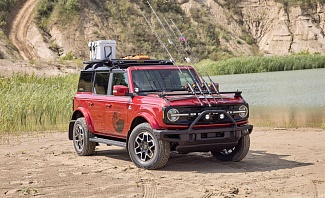