Spend Less on Speeding Tickets and More On Fun This Summer

This is a sponsored post written by me on behalf of Escort Max 360 for IZEA. All opinions are 100% mine.

I've been using the Escort Max 360 for a few months now and I love this thing. In the past, my bias had been against radar detectors because frankly most are confusing, noisy, and at worst inaccurate. The thing I love about the Max 360 though is that it has 360 degrees of protection and it uses GPS + your mobile internet connection to alert you about actual situations on the road ahead of you.

Here's an example ... while driving home last week I had the Max 360 on and up comes an alert for a speed trap ahead. Moments later the device says, "Ka-Band Detected!" and the signal gets stronger up to the point where the forward facing arrow turns to a rear facing arrow and the signal gets weaker. I'm still not sure WHERE that speed trap was but clearly it was there and because it was shared with the network I was able to avoid danger - even before the radar signals were detected! This is amazing to me since realistically, the moment your car starts being bombarded with radar waves the game might be already over.

The Escort Max 360 monitors all four types of commonly used bands - X-band, K-band, Ka-band and Laser so you have complete protection. There's even a smart digital signal processor to filter out false positives from radar-assisted cruise control, blind spot detection systems, and other sources such as automatic door openers as you pass by a store or gate. While these are generally well filtered by the Escort Max 360, you can use your brand too - if you see a low level alert on the X-band K-band then it might be one of those sources since the FCC has pretty much opened that bandwidth to many uses beyond law enforcement. On the other hand, when "Ka-Band Detected!" goes off - check your speed and stay alert since it's very likely to be police near you. 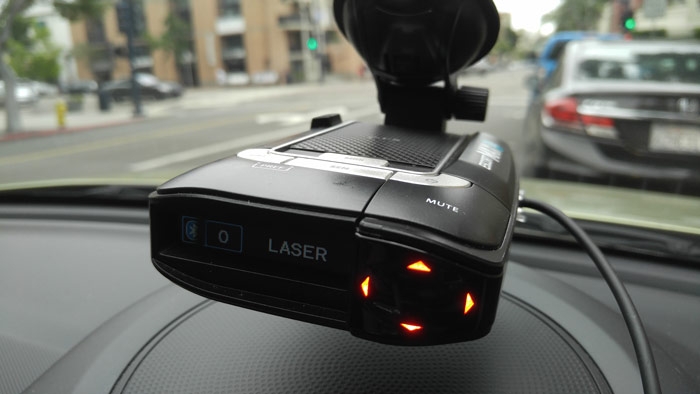 For laser detection, there are two common scenarios. The first is a "Photo Cop" where the laser is active constantly and attached to a camera and the other is a hand-held gun where the cop is pointing it at a specific vehicle that he thinks may be speeding. The Max 360 is equipped to detect both, but with the first scenario you have the advantage of lots of signal to pick up at a distance. With the second scenario though chances are he's already picked you out and since it operates on a very narrow beam it's much harder to detect. That's where the mobile crowdsourced alerts come in handy since the speed trap could be reported before you even get there! 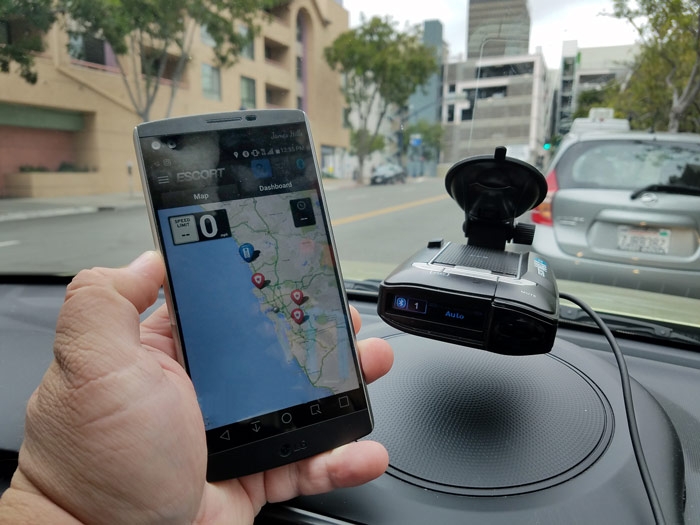 Directional Intelligence and Ability to Learn

While the Escort radar detector has excellent ability to detect signals across all of the current bands that police are using. However, it also has multiple sensors so that it can detect where those signals are coming from. This allows you know that the signal is ahead of your - or in the case of one trip I took to Vegas, the signal was two cars in back of me and followed for several miles. This allowed me to be more alert and once I identified a cop behind me I was a bit nervous initially ... until he decided to pass.

Similarly, it can actually learn to identify sources of false positives by comparing locations via GPS. Over time, it will identify these places and still show on the display - but no audio alert will be sounded.

You Still Need To Be Smart

No matter how awesome this Max 360 radar detector is, you have to be alert to your surroundings and a careful driver. This is another area where Escort shines. Not only does it alert you to danger ... but it actively keeps you safe. For instance, when connected to the mobile app it will pull the speed limits for the road and post it on the display. Then as you exceed those limits it will let you know.

Like anything, the value is in how you use it. When used properly, this is a great way to maintain safe driving and avoid mistakes. It shouldn't be used to enable excessively rapid driving, but instead as a way to moderate your behavior and be more observant of your surroundings. Personally, I find it fascinating to monitor what's out there and it's nice to have a way to monitor the speed limits rather than "guessing".

How I Survived CES From Dawn till Way Past Dusk

Tips To Make Sure Your Garage Is Ready for Fall