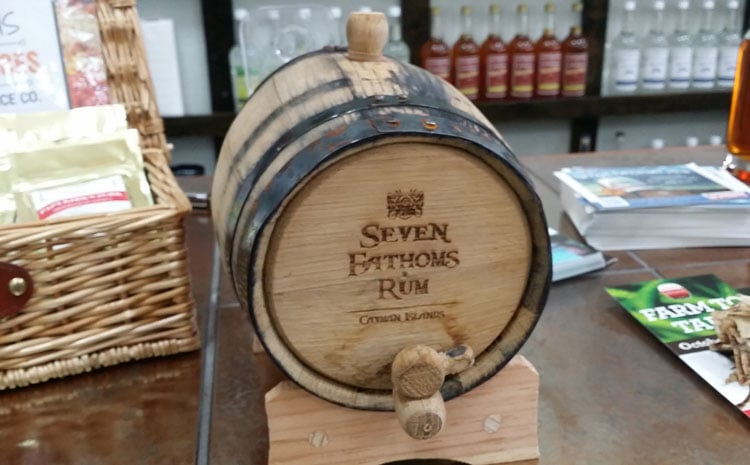 Visitors to the Cayman Islands usually focus on sites like "Hell" or "Stingray City" but last fall when I visited this amazing little island we did things a bit different. Instead of the normal tourist spots, we went to a distillery, made new friends, drank some world class spirits, and then almost missed the last tender back to our ship. Luckily we didn't miss our ship, but if we had - this would have been TOTALLY worth it!

Cayman Spirits has been distilling spirits since 2008 from a tiny shack in Georgetown Grand Cayman but in 2013, they moved into a fantastic new facility just outside of town with 5,000 square feet of space to offer tours, a tasting room, and production capacity to meet worldwide demand. 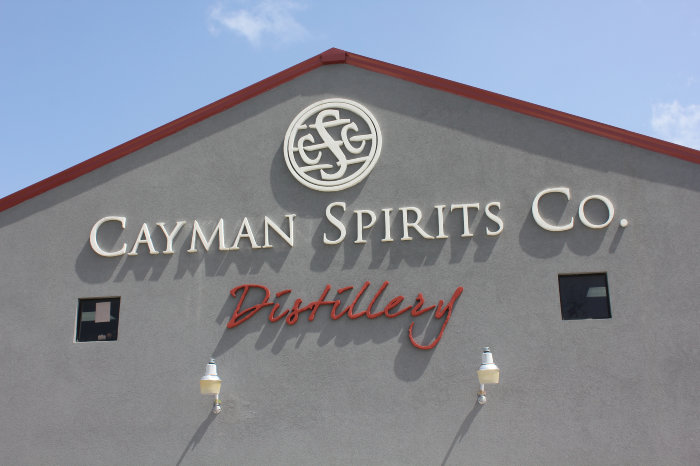 Our tour was led by Jordan Telford, who is also one of the distillers at Cayman Spirits Co. During our tour it was clear that the enterprise is a craft distillery in every sense of the word and it embodies the odd mixture of laid-back "island time" and Cayman ingenuity that you find across this tiny island. 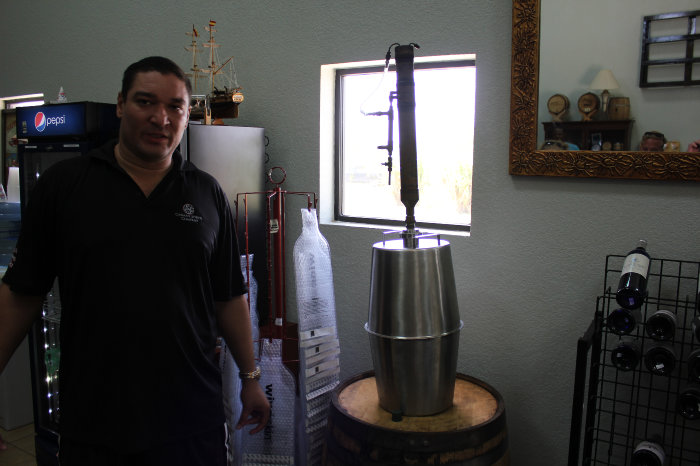 The two most notable examples are that their first still was actually two ice buckets that were soldered together and the second was that instead of building rick houses to age their rum, they sunk it to the floor of the ocean where the temperature, pressure, and gentle rocking has given it a remarkable flavor and color that I can't wait to get my hands on again.

It makes perfect sense from a historical perspective to employ this gentle rocking of the ocean. During the 12-36 months at 42 feet below the waves, the rocking and pressure forces the spirit in and out of the oak staves mimicking the process discovered by sailors hundreds of years ago as the daily rum rations slowly changed colors as the ships rocked and swayed through the seas. After many months, their rum went from clear and harsh to amber and more mellow.

In the case of Seven Fathoms though - the spirit starts off as an extremely fine white rum and then is finished in casks that formerly held Maker's Mark, so it's no surprise that the finished product will be something extra special. 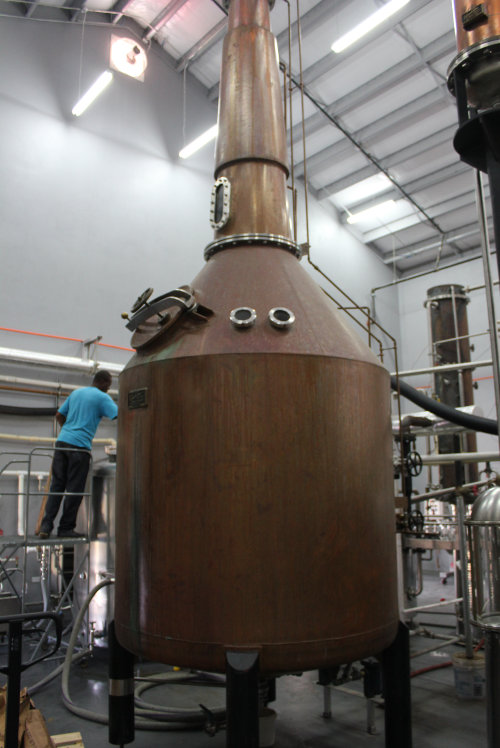 Previously, the company operated out of a small facility in downtown George Town. Today however, they have expanded their facilities greatly from that original ice bucket contraption and have a pot still as well as a massive column still with more levels than I have seen at any other distillery anywhere. However, the ingenuity and "craft" hasn't slowed down. In fact, there is even talk about planting their own field of sugar cane to use in the rum since currently they have to import it from off-island. 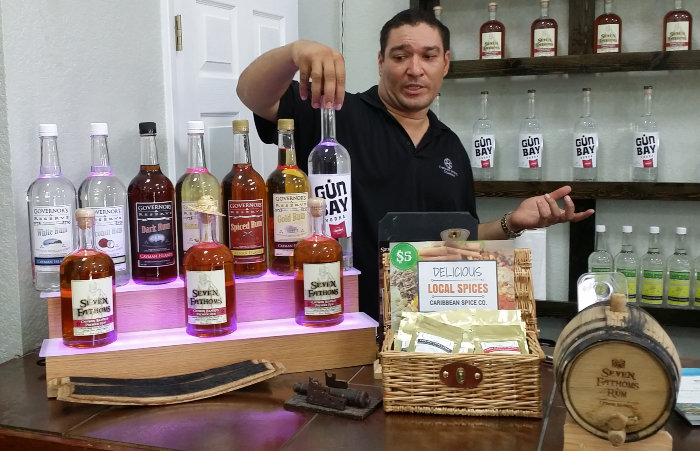 Ok, enough about the company - what you really care about is the spirits!

We'll get back to the rum in just a moment but first, I have to talk about their Gun Bay Vodka. I am NOT a vodka person at all. It simply isn't my thing except when it is part of a cocktail. However, their Gun Bay Vodka is brand new (March 2014) and was simply exceptional. I can't wait to get my hands on more of this as well. 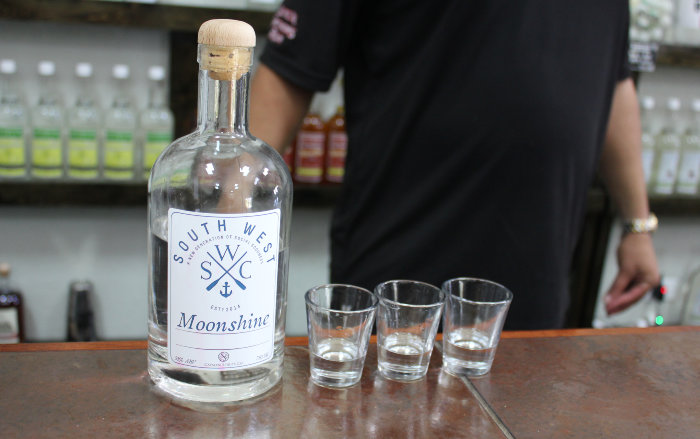 Our tasting also included samples of their South West Moonshine which was also quite good and led me to wonder if maybe one day we'll see the same process they use on the rum for this as well. 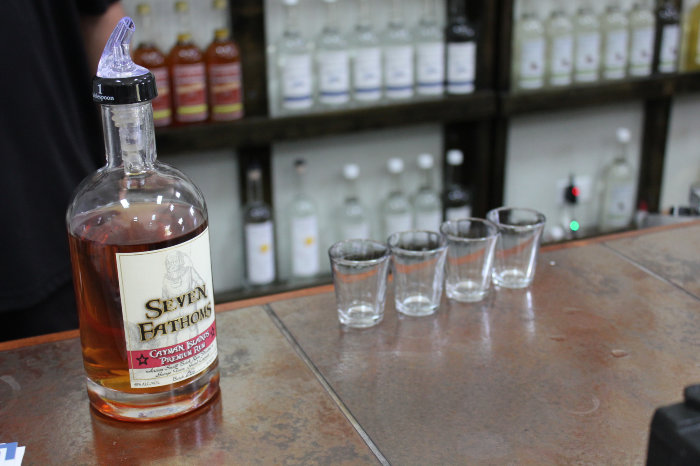 Ok, this is what we all came for - Seven Fathoms Rum!

A couple years ago I read somewhere that there were these guys aging rum at the bottom of the ocean and frankly blew it off as a fad, a gimmick, or at best something that didn't really add anything. After all, there are a TON of shitty rums floating around the Caribbean that someone slaps a fancy label on and promotes the crap out of. That's not these guys!

This is the real thing folks! In 2014, it scored a Double Gold at the WSWA and earned 90 points from Wine Enthusiast Magazine.

Seven Fathoms was simply exceptional - with a medium body with hints of sweet butterscotch and vanilla but without the syrupy sweetness that other rums sometimes have. It was also extraordinarily smooth and would be utterly amazing to sip on the deck of a ship while smoking a cigar with your best friends. (Trust me, if I'd been able to open this bottle on board the ship - I would have made a ton of new friends :) ) 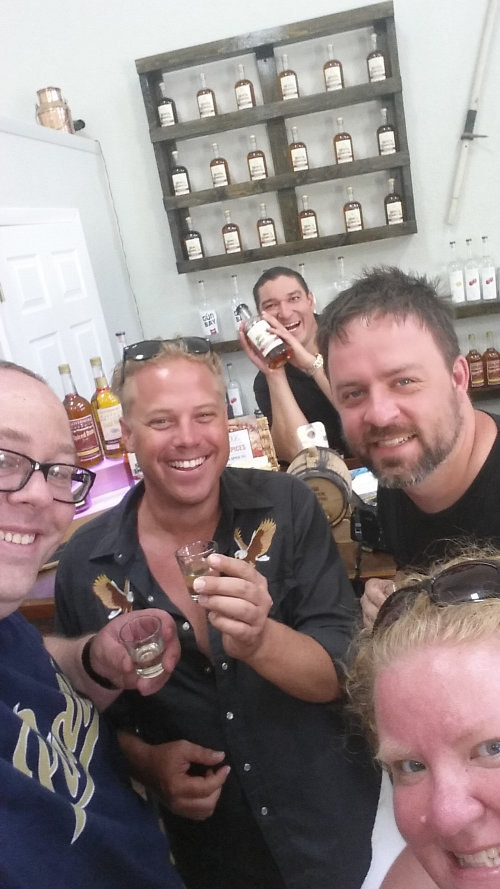 Tours book in advance and last 30-40 minutes and can be reserved online. Tours include a walk through of the distillery including the 1200 gallon Vendome copper pot still, the 30 foot tall Gun Bay Vodka tower column still, and the original Christian Carl pot still that they use for Seven Fathoms Rum. Cost is $15 per person.

Of course, no tour is complete without a stop in the tasting room and this one does this one :)

As you can see from the picture of our group above - we had a couple samples that day. Be smart though, if you visit here as part of your visit to Grand Cayman on a cruise ship - make sure to give yourself plenty of time to enjoy the spirits here. Sprinting back to the tender and fumbling around for your ID to show port security has a tendency to destroy a perfect buzz. 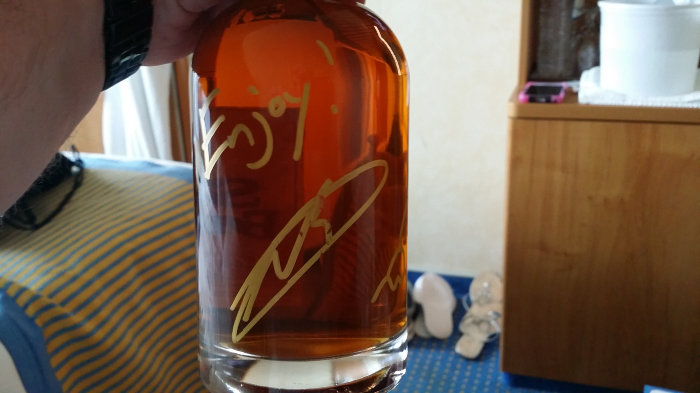 Ok, so I've talked a bunch about how awesome this rum is and how much fun we had. The real vote is with my wallet and YES I bought a bottle and managed to sneak it back on board the ship.

Thanks guys for an amazing tour, phenomenal tastings, and the signed bottle. I can't wait to return and visit you guys again.

Seven Fathoms is available at Bahama Breeze locations across the United States and at online retailers Marketview Liquor and Binny's. However, we really think you should just plan a vacation and visit their distillery in person for the full experience!