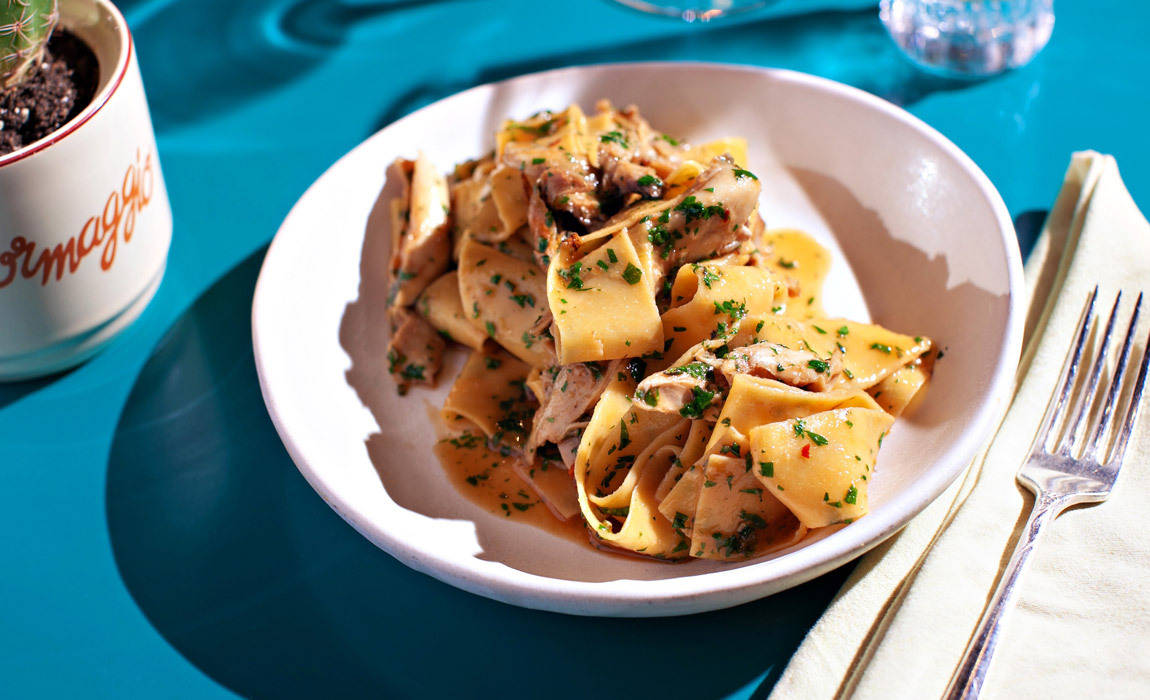 Chicken, ham, fish, beef, lamb these are all standard dinner meats but I personally love to explore flavors found in wild game animals. Even when they are farm raised, trying something different helps set the mood that tonight's dinner is going to be something special.

Almost all of the caloric value from rabbit comes from the lean meat instead of fat. This makes it an excellent food source. You will almost always find rabbit prepared with some type of sauce to enhance the flavor since by itself rabbit meat tastes similar to chicken. While generally speaking, meat from mammals would be considered red meat, rabbit is classified as a white meat.

While there are variations on how rabbit will taste based on the diet it is raised on, most people consider rabbit to taste similar to a fine grained chicken. However, it will often have a gamier and more intense flavor as you'd expect from wild game. These differences are accentuated based on if the rabbit meat is wild or if it was raised on a farm. Farm raised rabbit will tend to have more fat because of the diet and lack of exercise. This will also lead to a more mild flavor, softer meat, and lighter pink pigmentation.

Wild rabbit is the preferred animal if you are looking for the true rabbit flavor, texture, and experience.

Rabbit is actually healthier to eat than many other meat options because it is lower in fat than many other meats. It is also low in cholesterol. Additionally, unlike some other meat options, rabbit generally doesn't have religious exemptions such as pork might among Muslims and Jews or beef does with Hindus. Since it is relatively easy to raise and reproduces quickly, it has been popular in cultures around the world where other meats were too expensive and required too many resources to raise efficiently. Ironically today in western countries, rabbit is a premium meat because other protein sources are so much cheaper to prepare. This results in an interesting paradox where rabbit can be found both in fine French cuisine as well as used in ethnic dishes from a variety of cultures found around the world.

While also being more lean, it is rich in protein (18-20g per 100g of meat) and an excellent source of vitamins and minerals. This includes vitamins B3 and B12 as well as phosphorus, potassium and selenium. Additionally, depending on what kind of diet the rabbit was raised with, it is also richer in Omega 3 fatty acids compared to chicken and pork. Since rabbit meat is also low in collagen, it makes the meat very easy to digest.

Beyond personal health benefits, rabbit is also one of the most environmentally sustainable meats available today. Despite this, rabbit meat continues to be one of the most expensive to buy since it is challenging to raise mass quantities the way you can other livestock such as chickens and cattle. Additionally, because of the lack of scale, rabbit is much more expensive to process. This generally results in a much higher quality meat than you might find from a factory farm. However, if you compare rabbit to other meat that is not industrially processed then the price is comparable.

What Wine Pairs With Rabbit Meat?

This is a complex question because rabbit is often paired with sauces. In those instances, you should consider pairing your wine with the sauce and less on the type of meat. Similarly different cuts of the rabbit might be paired with different types of wine.

Light bodied red wines such as Pinot Noir would generally pair well with rabbit dishes that are presented without sauce. Other light wines that may work well when paired with rabbit include Gamay, or even potentially Grenache. Since rabbit is a very lean meat, you will want to seek wines that are low in tannin.

You can also pair the wine with the sauce. For instance, the Rabbit Pappardelle below might work well with Chardonnay. On the other hand, the Rabbit Curry might go well with a Rhone Valley blend such as Cotes du Rhone or even a GSM blend.

Ultimately, like every pairing recommendation, it is more important that you enjoy both the wine and food than any "rules" that someone might have told you. Clearly there are some bad choices, but drink what you like and enjoy the experience. 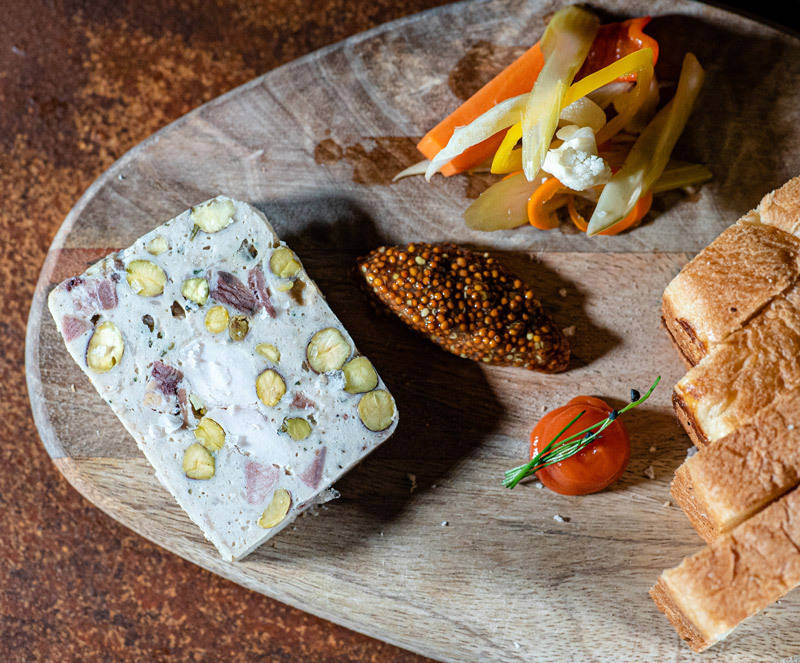 Method:
1. Sauté the garlic and shallots with the butter until translucent. Add the marsala and cook out the alcohol. Then add the herbs, salt and pepper, and let cool completely. Once cooled, pour over the lean rabbit meat and fatback to marinate overnight.
2. Pour brandy over the chicken breast and let marinate overnight.
3. Grind the lean rabbit, fatback, and chicken with remaining liquids from the marinade. Transfer the mixture to the robot coupe and whip with the heavy cream and egg.
4. Transfer mixture to a bowl and fold in the pistachios and smoked beef tongue.
5. Weigh this mixture and lay half of it in the terrine mold. Lay the rabbit tenderloins down the center, overlapping in the middle if necessary. Top with the remaining mixture.
6. Set terrine in a baking pan, add enough boiling water to come two-thirds of the way up the sides of the terrine, and bake in water bath in the oven at 325° for 30 minutes, then rotate, and bake for another 20 minutes. Remove from oven once internal temperature reaches 155° to 165°.
7. Remove from oven, pour off water, then return terrine to baking pan. Cool at room temperature for 1 hour.
8. Cover terrine with plastic wrap then refrigerates overnight using weights (a couple of heavy cans) to press the terrine. Serve sliced.
9. Press a piece of plastic wrap directly onto the surface of the pâté and refrigerate until firm. Serve sliced. 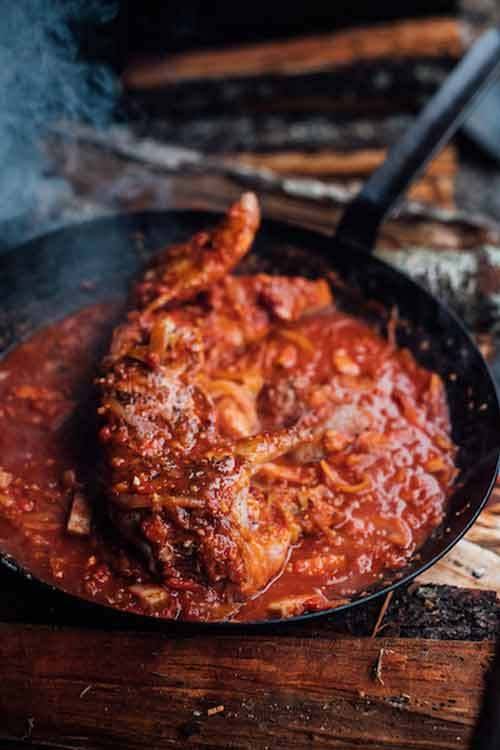 This bacon-tomato braised rabbit was born out of hunger and Cajun resourcefulness. It was the last day of the hunt, we’d about gone through all the groceries we’d brought, and I’d just shot a rabbit. How’d you kill the rabbit, you ask? Well, I was hunting for deer.

This dish is the product of what we had on hand. Wild rabbit always needs added fat, so I grabbed some bacon. We didn’t have any tomatoes, but we had fresh salsa, so that went in. (I still prefer salsa in it over fresh tomatoes.) The finished product is like a ragu with a thick tomato gravy. At the camp, we eat it right out of the pan. But you can serve it over grits, rice, or even a can of black-eyed peas. – Isaac Toups, Chasing the Gator

1 (2½-pound) rabbit, head off, dressed (no skin, no guts except heart, liver, and kidneys if you have them)
2 tablespoons grapeseed oil, divided
2 teaspoons kosher salt

› Rub the rabbit down with 1 tablespoon of the grapeseed oil and season generously with the salt and pepper.

› Heat a Dutch oven and 1 tablespoon oil over medium heat for about 2 minutes, until it’s hot. Sear the rabbit hard for 2 minutes on each side. (If you’re using the organs, leave them in the rabbit cavity while you sear.) Remove the rabbit. Add the bacon and onion and sweat for 2 to 4 minutes, stirring occasionally, until the bacon starts to render and the onions begin to soften. Add the garlic and bay leaves and sweat for another minute, stirring occasionally. Stir in the anchovies and salsa and bring to a simmer. Add the beer and water and give it a good stir. Add the rabbit. Bring to a simmer and cover with lid slightly ajar.

› Simmer for 1 hour, then flip the rabbit. Return lid (still askew) and simmer for another hour and 20 minutes, until the rabbit is fork tender. Serve that bad boy. 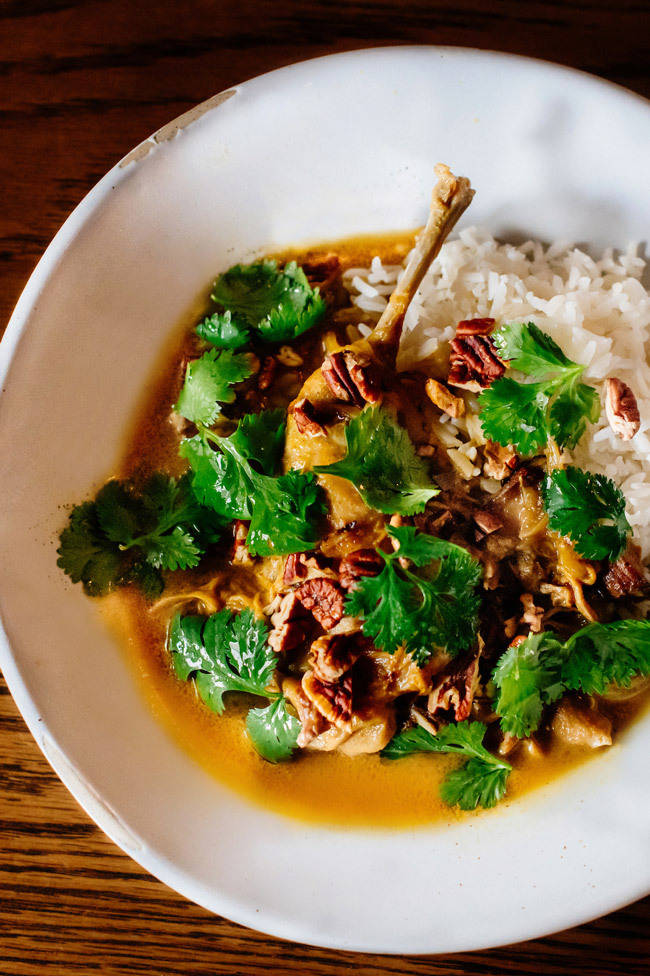 In a large rondeau brown rabbit and remove from pan.

Add the onion to the pot and cook to caramelize. Add fine ginger and turmeric, and sweat for about 2 minutes.

Add garam masala, habanero and sachet. Stir and allow the garam masala to toast in the bottom of the pan. Add brown chicken stock to pot.

Place rabbit legs in pot and cook uncovered at 300*F for 3 hours until tender. Add coconut milk and simmer for 20-30 minutes.

Taste and adjust seasoning as needed.

Serve with white rice and cilantro. 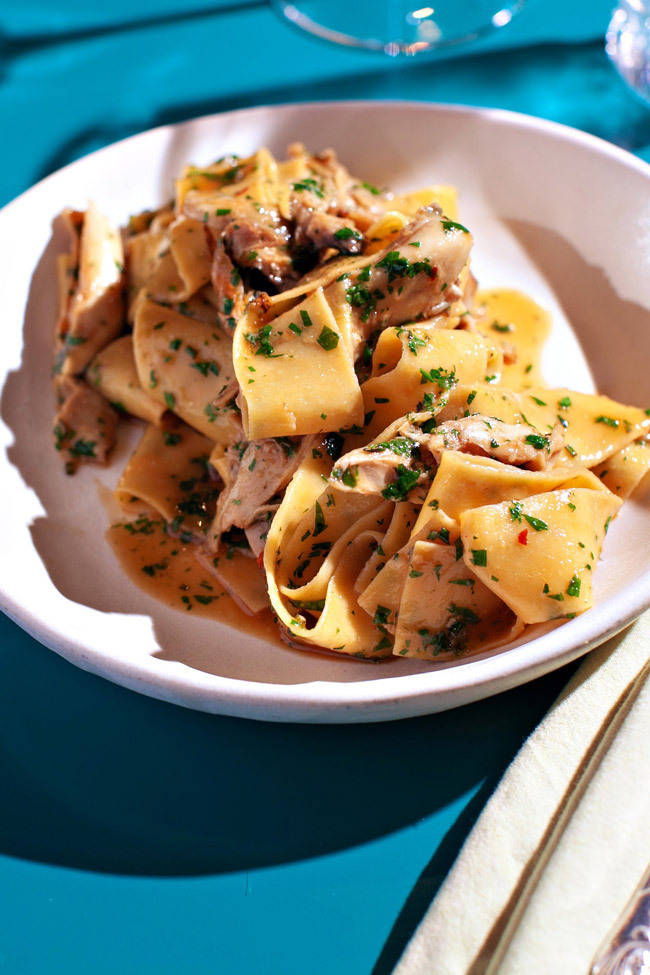 Sear the legs and bellies in a Dutch oven with canola oil until golden on both sides. Remove the rabbit and add the chopped vegetables and garlic. Roast until they begin to color. Add the rosemary until fragrant, then add the tomato paste; stirring to coat the vegetables. Add white wine and cook until almost dry. Add the rabbit back to the pot, and just cover with chicken stock. Bring to a simmer, and drop the heat to very low so the liquid is moving and steaming. Cover and cook for 2 hours. The meat should come off the bone with little effort but not be so cooked that it shreds apart.

Allow the rabbit to cool in the cooking liquid. Then, pick the meat into a separate container and strain the remaining liquid; reduce by 75%.

To finish (one serving):

Add ¼ cup of olive oil and the sliced garlic to a heated pan. Once the garlic is sizzling, add a tsp each of chopped parsley and rosemary. Allow the herbs to sizzle then add the cooking liquid and tomato sauce and bring to a boil. Add the picked meat and cook together until a ragu forms and the liquid starts to look like a loose sauce. Drop in your cooked pappardelle, bring back to boil, and toss together. Finish with ½ tsp of fresh herbs, 1 tbsp olive oil, and Parmesan. Toss it all together to combine and serve, finishing with a little more Parmesan and olive oil on top. 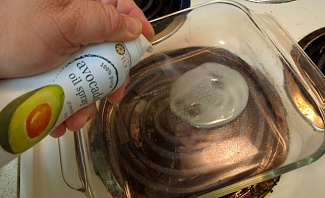 Advantages of Avocado Oil For Grilling and Baking 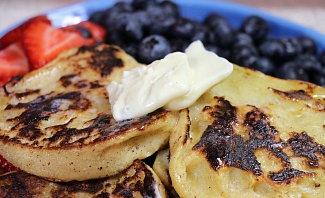 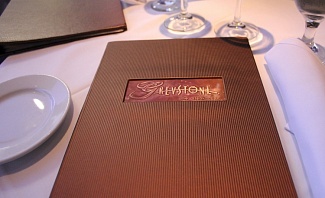 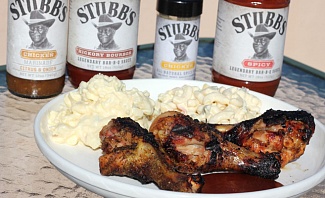