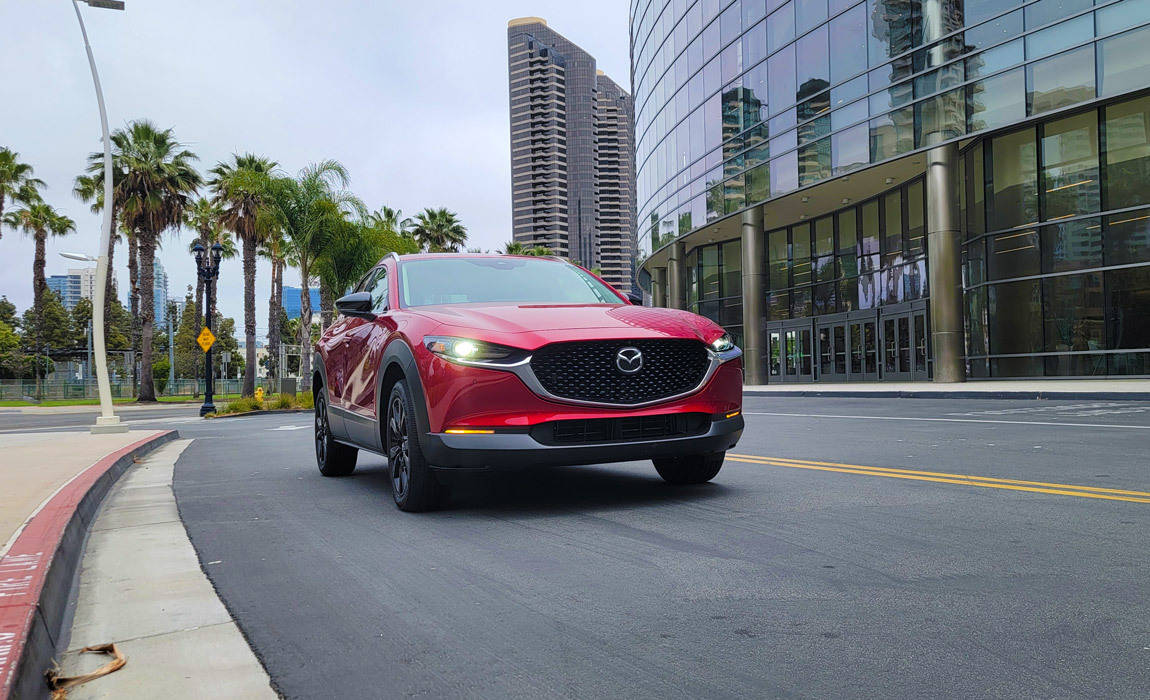 Mazda has made its name in motorsports but more recently their focus on vehicles has been a more affordable luxury product that sits somewhere between mass-consumer brands like Chevy or Toyota and Cadillac or Lexus. Instead of splitting the brand they have developed a fantastic line of cars that drive well and are designed around maximizing the experience of driving.

In Mazda's words, " We feel that a car and driver should have a relationship similar to that of a horse and its rider. This is called Jinba-ittai, a philosophy that lies at the heart of Mazda’s vehicle development. Our Kodo design language uses a minimalist approach to create sophisticated styling that makes our vehicles feel more refined, elegant, and upscale. Our vehicles will look and feel truly alive." 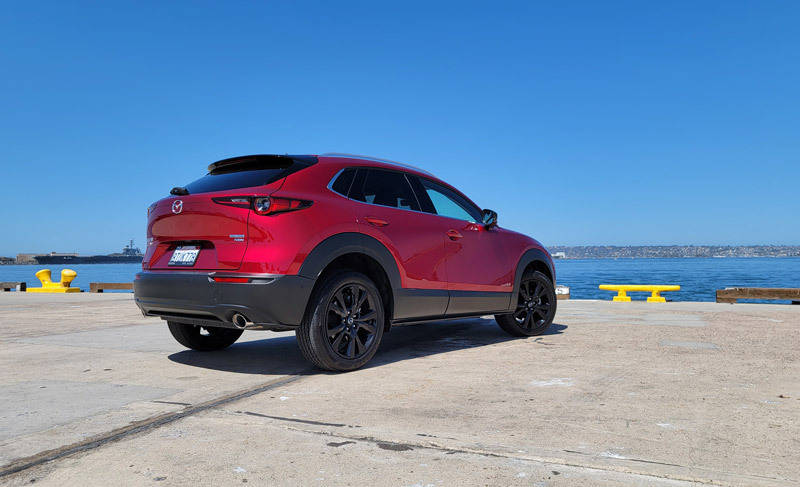 It's been a while since we've had the opportunity to drive a Mazda but I can say that I honestly really am impressed with the CX-30, just as I was during the launch of the CX-5 and MX-5 vehicles several years ago. For the most part, the cabin is just laid out in a very natural manner and despite the vehicle's compact nature and my well ... very much not compact body, it was still very enjoyable to drive.

I say "for the most part" because there's one major failure when designers try to optimize an experience. There is a risk that changes and optimizations may actually feel complicated or awkward. This is true for Honda as well and specifically regarding the entertainment system it is a challenge with Mazda too. One could say that if you were an owner that you'd simply learn how it works to do basic functions like changing songs or adjusting features. However much benefit it might be to someone who invests the time to learn ... the simple fact is that it isn't intuitive.

There are two specific areas where this was detracted from my otherwise strong affinity for this vehicle.

First, somehow (likely when moving around or maybe an object was placed in the center console) the volume button was pressed and held for a few seconds. This turned the entertainment screen blank. I looked for buttons to try to turn it on, cycled through options on the settings in the steering wheel / gauge screens, and pretty much everything else I could think of. I couldn't figure it out at all. So as a result, I drove this vehicle for a week without music, navigation, or anything else that you'd expect. I did however have about 3-4 hours of driving experience with it and that was enough to test the stereo and setting up my phone.

Second, while there is a HUD - a VERY WELCOME - feature that made driving incredibly enjoyable. However, there's no buttons to move it up or down to match my height and viewing angle. Instead of a physical button, this adjustment is hidden in the entertainment console settings somewhere. While it is nice that the engineers decided to reduce the number of buttons, hiding it in the digital screen like this just simply made it more complicated. 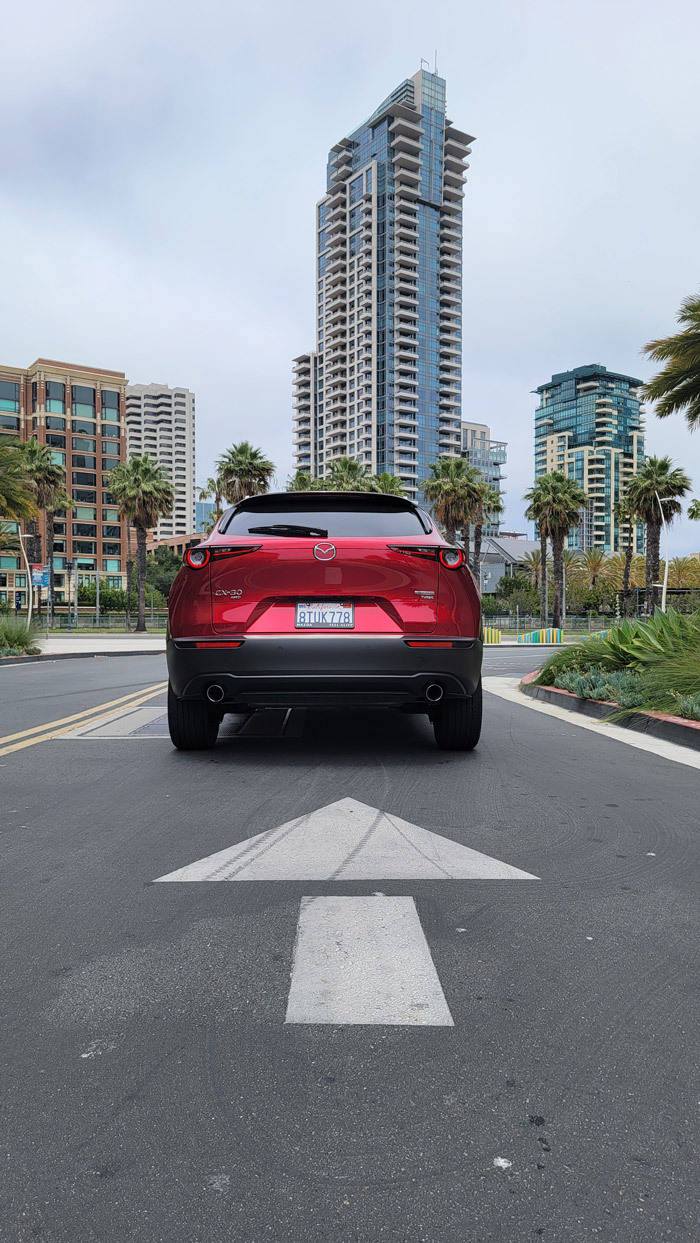 With that rant over, the rest of the car is spectacular. This is a car that is meant for driving and when you consider the cost / performance ratio it is one of the most fun vehicles I've driven in the past year.

While 250 hp isn't exactly a massive engine, the compact nature of the vehicle and relatively light weight made it equally fun driving around town as it did on some twisty mountain roads. In fact, I had so much fun driving up the mountain that when we stopped at the top and I took a deep breath of clean mountain air, my passenger responded "all I can smell is the brakes".  It is that sort of exhilarating experience at an affordable platform that makes Mazda special. 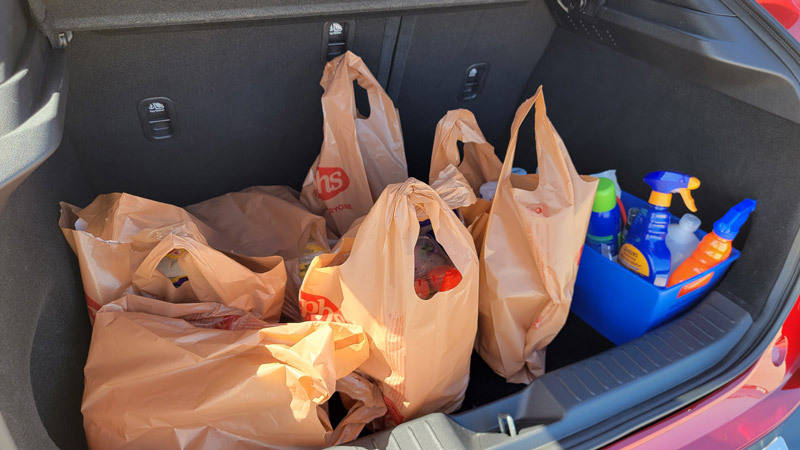 Unfortunately, you can't always be zooming around curves, sometimes you need to do grocery runs too. The CX-30 Turbo excels here as well. The trunk space is absolutely enormous compared to the overall compactness of the car. While my rear seated passenger bemoaned the fact that he didn't have a few extra inches of leg-room instead of loads of cargo space I think this was the right choice for most buyers.

For instance, while I might have a rear passenger 3-4 times per year I need trunk space 3-4 times per month. When I look at mid-sized crossovers that are on the market today, many of them don't even have this much usable space.

Clearly if we had kids then this would be an issue since it would be more likely that there would be three or even four passengers. However, for younger folks that are pre-family or older folks that don't need something fun that doesn't screen family hauler but is still practical, the 2021 Mazda CX-30 is a fantastic solution. 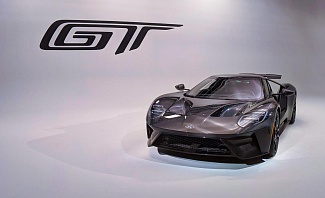 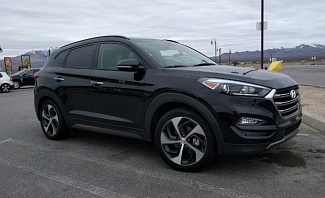 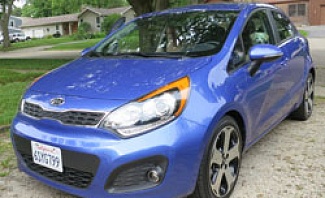 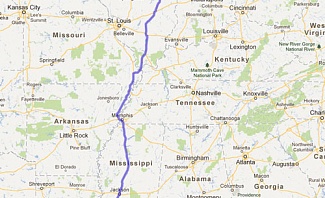