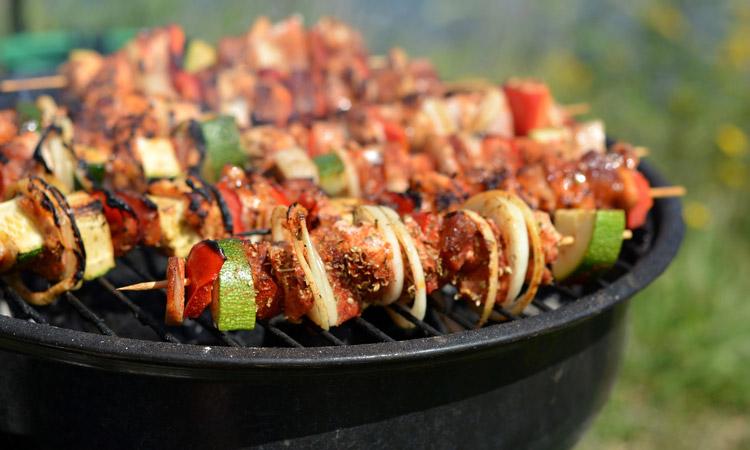 For us men, the summer can only mean three things: warm beer, terrible t-shirt tan lines and firing up the grill. But while we can live with the first two spanners in the works, nothing is worse than letting a barbecue bash fall into the realm of disappointing. That’s where we are meant to thrive. It’s where we’re meant to come alive as cooks, hosts, and humans.

Yet, it seems to be an ever-increasing lost art with more and more blokes succumbing to the illness known as, “Terrible Barbecuer”, cremating both sausages at the same speed as your own reputation.

This needs to stop and it needs to stop now. That’s why we’ve pulled together the ultimate guide to help you up your grilling game this summer and claw back the title of, “God of the Grill

Food Is The Centerpiece So Make It Awesome

There aren’t many parties where the food steal center stage quite as much as the barbecue bash does. But it’s not just knowing how to cook sausages without burning them, give buffalo wings the perfect spice, barbecue your favorite fish or turn your grill into a smokehouse. It’s about the sides too. Done right, every barbecue needs to have an Insta-worthy amount of impressive sides. And party dips too. Fact.

According to etiquette, your guests are responsible for bringing nice summer wines and seasonal beers in exchange for you cooking the meat and letting your house get trashed. But that doesn’t mean you can’t offer a cheeky summer cocktail (blackberry mojitos go down particularly well) or a sangria of some kind. Oh, and maybe get the kids involved by making a delicious (and harmless) mocktail for them to indulge in until they feel sick.

After food and drink, entertainment ranks pretty high up on the list, which is because eating will only last so long, small talk will eventually run out and kids have the attention span of elderly gnats. So, to avoid politics and religion becoming conversation topics, make sure you have plenty of bits to keep people occupied. While cell phone streams are nice since everyone has one, for a party you should make sure that you have something faster and more reliable. For instance, according to Suddenlink Communications, with a gigabit Internet service you could download an entire playlist in just seconds or an entire movie in less than half a minute! Pair this fast internet speed with a multi-speaker network so you have the audio in all of your party spaces and you can have happy guests as well as spread people out so there's not a huge crush in any one space..

The real unsung hero of the barbecue bash will always be the cooling-off area you set up. It’s an essential move to make and that’s because barbecues tend to get lit exclusively on really hot days. That’s why you need some shade. It’s to stop people passing out from heat exhaustion and ensure Ginger Joe doesn’t do his normal thing of burning, peeling and then crying. It will also give you an area you can focus on when making your yard pretty. A few colorful cushions, some rugs and a couple of sun-loungers should be more than enough to make people comfy.

Fitness Tips for Running In Winter