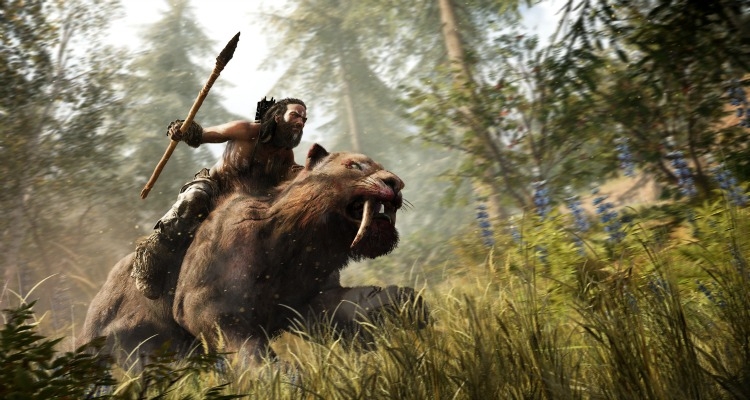 It's starting to be that time of year again - we're passed the Christmas crush of new games an gearing up for the spring. As a huge fan of the Far Cry series, I'm super excited about the pending release of Far Cry Primal. So, I decided maybe it was time to do a roundup of some of the other games that will be coming out this year that I'm looking forward to as well!

Set in a prehistoric times about 10,000 BCE, Far Cry 5 Primal takes place in the fictional Oros valley in Central Europe, an open world filled with wildlife such as mammoths and saber-toothed cats. Survival is a daily challenge as tribes come into conflict with one another and nature.

Players take on the role of a Wenja tribesman named Takkar (Elias Toufexis), who is stranded in Oros with no weapons after his hunting party is ambushed. Takkar, using his newfound skill of taming animals, will eventually rise to power and lead his own tribe. While there's no machine guns here, you can never underestimate the awesomeness of being able to ride a saber-toothed tiger or hunt mammoths with a spear!

Developed by Quantic Dream and a PS4 Exclusive, the plug centers aroudn Kara - a freshly produced android with artificial consciousness who is discovering live among humans in Detroit.

An unexpected hero fights for survival on a world ravished by a smart and deadly alien plague referred to only as, "Smart Matter". You will explore the world trying to uncover its secrets and fight for the survival of the human race.

Unlike previous games, this one will be released in an episodic fashion, starting in March with an introduction pack consisting of a prologue mission and Paris location. New game content will then be released on a monthly basis following launch.

Developer Bethesda launched this at E3 last year, but we're excited to learn more about this sequel. 15 years after The Dunwall Plague, the Empire begins to plunge into chaos after Empress Emily Kaldwin is suddenly dethroned by an 'otherworldly usurper', and becomes an outlaw to society. Determined to claim it back, Emily follows the steps of her royal protector, Corvo Attano, in becoming an Assassin. Armed with the Outsider's mark, she intends to reclaim her title and restore power to what had been lost.

The Division takes place in mid-crisis New York, an open world with destructive environments that are free for players to explore. The player's mission is to restore order by investigating the source of a virus. Players have to team up with other Division agents as they progress.

We already know the plot here, so let's just watch the trailer! It's coming out Friday, May 13th on Xbox One, PlayStation 4, and of course - PC.